Sometimes things do not always go according to plan. It is never without good reason but in the business of adventure travel one has to be adaptable. At the time it is always hugely disappointing but at the end of the day you stand by your decisions.

In 2005, while climbing Mera Peak, the Sherpas, who have much more experience than ourselves regarding the conditions, deemed the crevasses in the glacier too dangerous. In 2006, an attempt on Menthok Peak in Ladakh was thwarted by bad weather and a particularly dangerous looking cornice, which proved the wisdom of our decision to abort by collapsing into the gully we would have been climbing at the time. Ladakh has provided more than its fair share of problems over the years with collapsed moraines releasing a glacial lake, cloud bursts causing devastating landslides, killing hundreds. All these have to be managed with the safety of the group or individuals of paramount importance.

Sometimes, it is only the individual that has to accept change. Over the years one or two have had to return to lower altitudes or even the UK. To experience it is to understand the emotional impact this has on the individual. It has happened to me more times than I care to remember. In 2003 it was a damaged ankle, in 2011 pneumonia and now, in 2013 a chest infection initially brought out from the UK but made worse by heavy breathing while exerting at altitude and yak dung burning stoves in lodges. Long periods of coughing in the night were producing a slight pinking of my sputum, a classic indication of the early stages of pulmonary edema. I really had no choice in the matter.  If I went higher it will inevitably get worse, making a descent lengthier and more difficult.  Common sense dictates the actions you take but it does not make it any easier, even more so when you are the group leader. There is no easy way to tell them that you are leaving. You hope, above all hopes, that nothing really changes for them, that they still have an experience of a lifetime. What has made this particularly difficult is that I was having a special shared experience with Stephen, whom I rarely see as be lives on the other side of the world. 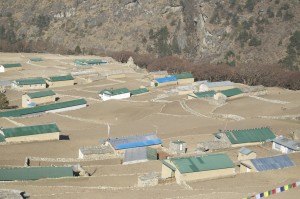 Having made the decision, I informed Tanka that I had no option but to go down.  He appointed Karma to walk down with me.  After an emotional announcement and parting, the group headed on up the hill, while I retraced our steps of the previous day and headed for Namche.  There was no real alternative to having to drop 200 metres to Phortse Tenga to then climb steeply the 350 metres up to Mong.  The reward was a long rest at the top.  The rest of the journey to Namche was relatively easy with a long, gentle downhill section to the point where you turn into Khumjung, only we continued to traverse the hillside all the way to Namche and the Camp de Base Lodge.  Karma was very patient, carrying my kitbag on his back and his own rucksack at the front.  He made it all look so easy.

In Namche I had a little wander to pass away the time and finished up in one of the bakeries for a bite to eat and a proper coffee.

Setting out from Namche at 7.45am it took just an hour to reach the foot of the hill that took so much effort to climb a few days previously. another hour saw Karma and me drinking coffee with Ang Darki and Nima in their lodge at Monjo, just yards outside the Sagarmatha National Park. It began to occur to me that we could go all the way to Lukla, thus giving Karma a good chance to meet up with the group while they were still high. 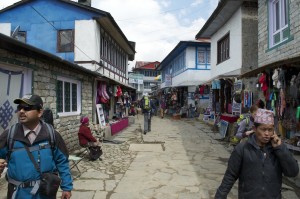 Stopping for an early lunch at Phakding meant we still had plenty of time for the final leg of the journey to Lukla. I was coping well with anything downhill or on the flat but struggled with my breathing on anything that resembled uphill. Karma predicted that it would take about four hours to walk to Lukla from Phakding but we actually did it in two and a half. The upside of completing the walk today is that I no longer need to put further stress on my chest. The down side is that instead of spending five days in Lukla, I now have six days to kill. How best to use this time? There is certainly not enough here to keep me occupied and boredom might feature fairly quickly. It occurred to me that I might best use my time by returning to Kathmandu on Tuesday in order to fulfil my duties for the charity with Saptagandaki and Tashi Waldorf, so that I can return to Lukla on Friday or Saturday to meet the group. The benefit of this is that my time with the group before their return to the UK and my time with Hira after they have gone will not be interrupted by other pressures. It all depends whether I can get a seat for a flight from Kathmandu to Lukla at a very busy time of year. Fingers crossed.