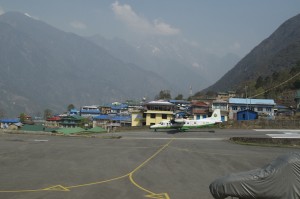 Paradise Lodge is immediately behind the control tower 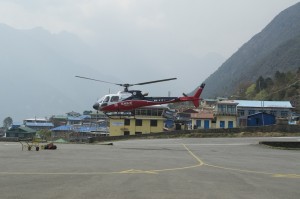 The prospect of six days having my ears and chest cavity rattled and vibrated held little appeal so I asked Hira to see if he could organise a flight for me from Kathmandu to Lukla on Friday or Saturday so that I could ask Ang Passang to get me a seat out on Tuesday.

To break the monotony, I went out in search of Pradip and his group, returning from their own trek. It did not take long to find them at the Shangrila Lodge at the top of the runway. I have used it as a base at the start and finish of a trek many times. They had had a good time but it had not been without incident with a number of illnesses, including one girl who kept passing out and had to wait in Namche for five days with a member of staff. We chatted for a while but as they had things to sort I did not stay long. Having been invited for supper there would be plenty of time. I admit to looking forward to something other than lodge food.

More time killed at Paradise Lodge being rattled by choppers. At least not all the flights were of fancy as there was a mission to rescue one of the ice doctors who had fallen down a crevasse. Sadly it proved in vain and although he was retrieved he did not survive the ordeal.

In the evening I wandered back up to the Shangrila Lodge for a welcome change of diet from the normal lodge food. Leaving the children and some staff to enjoy their soup, Pradip took me, Dambar and a couple of the Tudor Grange staff into the lodge proper to share a plate of delicious buffalo strips and a glass or two of red wine. It was only when this ritual had been completed did we rejoin the rest of their group for the main course, a traditional Nepali rice, dhal, vegetables and chicken. Delicious! This was followed by end of trek chocolate cake, bought from the bakery in Lukla. Prem, Pradip’s father, baked many ‘end of trek’ cakes for us over the years and would be unimpressed with his son resorting to a bought cake. After the pudding I made my leave, wishing to know what my flight arrangements were for the next day. It was good to talk to Kevin Hall from the Worcester branch of Tudor Grange and his Australian counterpart from the Solihull branch.
Back at Paradise Lodge I learned that I was on the first Sita Air flight and had to be at the airport at 6.00am.

I had a terrible night’s sleep waiting for the alarm to go off. For a brief moment after we took off I felt the emotions surge – not only was I leaving the mountains but, more importantly, I was creating even more distance between myself and the group. The horizontal view from my portal in the plane was as stunning as ever and I tried my utmost to put names to the multitude of peaks, so recognisable from the ground but so difficult from a plane. The view below was virtually obliterated by a thick haze. Just occasionally the vivid pinks and reds of rhododendron trees penetrated the murky atmosphere. Kathmandu was even worse and seriously needs some rain to bring the dust down. But it is not all dust in Kathmandu; it is pollution from traffic and hundreds of brick factories belching out thick smoke from their furnaces. Immediately the heat hit you as you stepped from the plane. Fighting Kathmandu traffic, I eventually arrived at the International Guest House on the outskirts of Thamel, not really a hotel I would want to bring a group to but very satisfactory for my individual needs.