It is easy to assume that when you organise a walk well in advance of the weather forecast there is a good chance you be unlucky, particularly in December. However, the twenty three of us walking the Lawley and Caer Caradoc on Sunday 8th Dec. could not have had a better day. The sun shone throughout, the wind was light and it was relatively warm for the time of year. Add to that, it was an area most had not walked before but had seen it on many occasions as they drove up the A49. 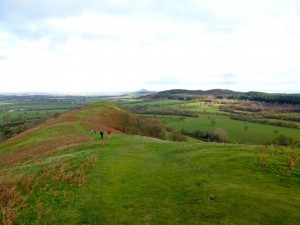 Leaving Church Stretton, crossing the railway and the busy A49, we headed over fields for a gap in the hills to access the eastern side of Caer Caradoc. We then followed a track up to a col where we ventured across a ridge known as the Wilderness. This took us to the hamlet of Enchmarsh, from which we gained access to Hoar Ridge running parallel to the east of the Lawley. By the time we reached the northern tip of the Lawley Ridge it was time to relax in the sun, using trees as back rests and enjoy some lunch. To the north the whale back of the Wrekin rose steeply out of the Shropshire plain. 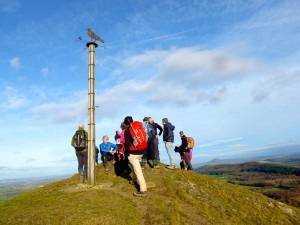 The summit of the Lawley

The Lawley is a delightfully easy ridge with the rolling hills of Hope Bowdler, the Wenlock Edge and the Clee Hills to the east, and the Long Mynd, the Stiperstones and the hills of mid-Wales beyond. The grassy path undulates up the ridge and as it drops quite steeply either side it gives a more dramatic feeling of exposure than actually exists. Had the weather been foul I think we would have felt very exposed. On the summit of the Lawley there is a weather vane with a large seagull on the top. It is strange that this should be so when we about as far from the sea as you can get and there are many more interesting birds local to the area they could have used. 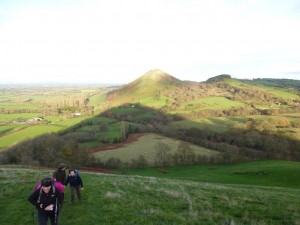 The descent from the Lawley starts out quite gently but steepens significantly down to the hamlet of Gomley. From here we began our ascent, first of Little Caradoc. On this route all the steep ascents and descents were saved towards the end of the day. The ascent up Little Caradoc is about 125m but it is steep and the first time on the entire walk when you have to make an effort. It comes as a bit of a shock. Once there the ridge plateaus out to a saddle before another slightly less steep climb up to the main summit. By now the sun was quite low in the sky and the light effects on the hill and the surrounding area was fantastic. England is a beautiful part of the world and it was great to have this opportunity to appreciate it. 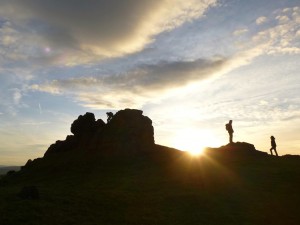 The rocky summit of Caer Caradoc

Reaching the summit it flattens out but is made more interesting by a variety of rocky outcrops. It has quite a large summit area before it begins to descend to the col we walked through several hours earlier. The nearer we got to the col the steeper the descent. Fortunately, recent good weather meant that it wasn’t too slippery. When wet this descent can be quite treacherous. As the light began to fade we crossed the fields, the road and the railway into Church Stretton having had a good walk in good company and in excellent weather. Thanks to Claire Cox for the photos.

Let us hope for a similar day for our New Year walk on the Malverns on the 2nd Jan.