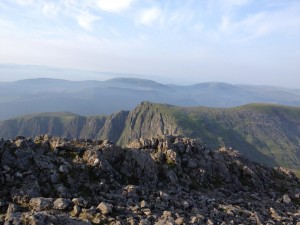 A beautiful summer’s morning on the top of Cadair Idris

My early morning dash up Cadair Idris last summer provided stunning views from the summit before the heat of the day hazed it out. That stunning excursion gave me enough desire to return with a group and so we found ourselves, twenty four of us in total, gathering at King’s YHA on the evening of Friday 24th January. It had been a wet drive through mid Wales to Dolgellau and the forecast for the weekend did not show much promise. The last of the group arrived by 10.00pm and we were well on the way to clearing some space on the shelves where the alcohol was stored in reception. 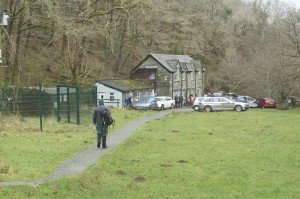 King’s YHA is superbly placed, a long way from anywhere, approached by a narrow lane meandering through beautiful Welsh countryside. The hostel is going through a phase of refurbishment and improvement. The staff give a very friendly welcome and the facilities are good, and will be even better once all the work is done.

The morning dawned dry but mainly cloudy and it was clearly very windy at altitude. Following breakfast we prepared for our day on Cadair. Departure was delayed slightly while Ann’s car was loaded on to a flatbed so it could have a new tyre fitted while we were walking. The mechanic who came to collect it was well beyond retirement age and Ann felt she needed to support his arm as he walked around. He turned out to be 87. The car park was very crowded and some maneuvering had to take place before its departure to Barmouth could be achieved.
The walk up from the hostel along the river is beautiful. Out on the open hillside the tops of the hills were shrouded in mist but at least it wasn’t raining, yet! The wind increased as the morning progressed, getting close to the predicted 50 mph forecast. After a couple of hours we reached the ridge and were hit with a fierce wind. Several were bowled over, the wind being so forceful that we stood little chance of staying upright. Gathering in a huddle we decided that it was too dangerous. Despite the fact we were probably only 15 minutes from the summit, it was just not worth the risk. The path skirted very close to the edge of a long precipitous drop and there was the potential for somebody becoming airborne and going over. 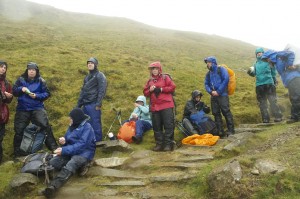 Snatching a bite of wet lunch

As we began the descent it started to rain heavily, the wind whipping it into our faces. Rucksack covers were wrenched off by the wind and flapped furiously behind us. Thunder rumbled above us and we were relieved to get back. A slip on wet rock saw me tumble and take a bit of skin of my knuckles but more annoyingly rip my new waterproof trousers! It was a relief to get back to the hostel at about 2.30.

The prospect of a good walk on the Sunday did not look good with torrential rain forecast accompanied by strong winds gusting to 85mph. Yuck!!
Predictably the morning dawned with heavy rain and very strong winds. Over breakfast we deliberated the prospect of a low level walk along the disused railway path on the southern side if the Barmouth estuary. A hardy group decided to go for it while the majority decided to call it a day and head for home. With me heading this week on a nine week trip, I decided to duck out and give some time to sorting myself out before embarking on a long trip.
I have now been up Cadair Idris about a dozen times and last summer remains the only time when conditions were good and I achieved the splendour of the views from the top.

THIS BLOG HAS BEEN CAPTURED BY PIRATE CAPTAIN DAVE AND HIS CREW!!

Following the departure of Captain “Fairweather” Walton and half the crew in a whaler this blog has been taken over by Pirate Captain Dave Thomas and his band of brigands:-

First Mate Steve – dastardly fighter with his recent scar having seen off a vacuum cleaner and a stairwell.

Lookouts Mike and Alison – no one less than 6ft may apply.

Ship’s software engineer, Pete – a forward looking crew expecting major changes in technology then he will have something to do.

Recent recruit Tom the Cabin Boy – a hot shot with a Lee Enfield 303. 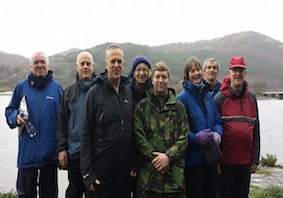 The gale was a blowin’ from the south west so prudence told us to seek shelter in the Mawddach Estuary in the lee of the mighty Cadair. We set sail in rough seas and high wind rain from the aptly named and deadly Arthog Bog and after some tacking set an easterly course at a good 3 knots. The First Mate had forecast fine weather at six bells and sure as ships biscuits it was to be. Captain Dave opened up the mainsail and with the Cabin Boy steered the crew to Penmaenpool where we moored up outside the George III Hotel and re-victualled on fine soup, whitebait and ale.

The crew was then dismissed and sent homeward, happy and tired.

It is foretold that Captain “Fairweather” and his mate Nurse Angela of the soothing words and calming manner are off to sunnier climes to explore the eastern and southern oceans. We wish them fair weather and if it gets foul and Nurse Angela is abandoned then Captain Dave and Crew are standing by for the rescue.

No doubt we shall meet again, maybe on some eastern river in the land of temples – in which case “Watch out, “Fairweather! You never know what might befall.”