I won’t bore you with the details of each school visit we made. This is not really the platform for that. However, there its one success story I would like to share. For some months we have been running a pilot scheme where each child in a number of schools have been provided with a thermos lunch box. Having supplied the boxes, it is then up to the schools to educate the parents into putting food into the box each day before sending their children to school.

It was while on our way back to Taplejung that we made time to walk up to Phoktanglung School to see the children enjoying their lunch.

We arrived at 12.55, five minutes before the lunch bell went. The thermos lunch boxes were stored in the head’s office. We had two representatives of Rotary with us to assess the project. 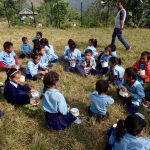 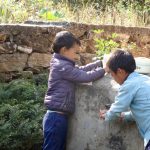 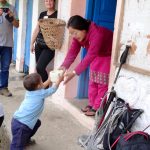 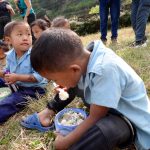 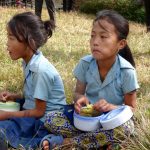 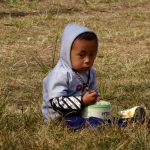 Opening the boxes there were a variety of vegetables on the top layer. Beneath was an ample portion of rice. They mixed their vegetables with the rice. Some ate with spoons while others used the traditional right hand. It was civilised and quiet. The staff were around but they did not have to intervene at all. There were 34 children and they all had a lunch 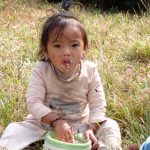 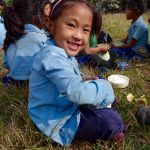 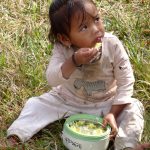 When they finished they washed their lunch boxes out and put them on the wall to dry.

Meeting with the head afterwards he said, when asked if there had been a noticeable change since the introduction of the lunch boxes, that there had been improved attendance and that the children were more focused.

The Rotary people who were with us were very impressed and also see no reason why we should not promote these plastic lunch boxes rather than the all stainless steel version, which is almost twice as expensive. To supply 1300 children with similar boxes would cost approximately £4500.

At the time of writing we have had a number of donations amounting to around £2000. Another £2500 would ensure that all the children in our project area can receive a lunch box, and further increase their learning potential and educational outcomes.