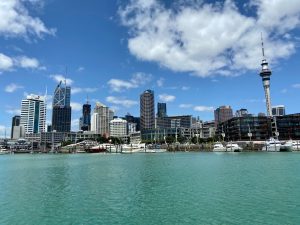 Leaving a dull, damp England behind, we headed out to gloriously warm and sunny New Zealand, not realising just how dull and damp England would become and how settled the weather would be down-under.
Following a week with the family we prepared for the arrival of friends from England. The two Chris’s and John arrived on schedule from Singapore and we whisked them off into Auckland, across the bridge to Takapuna Motor Lodge. It was good to have the group together after so many months of planning. Now the adventure could begin. 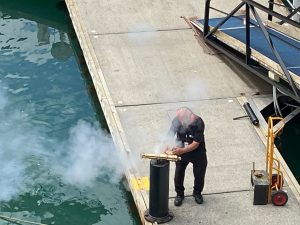 The next morning Angela had an emergency call to help with the family as Riley had been using the settee as a trampoline, while backs were turned, and had split his head open on the coffee table. While Angela was at the hospital, I took the group into Auckland for an amble around the waterfront. Parts of it a very difficult to negotiate because of all the work that is taking place, but the marina, by far the most interesting area, was hassle free. With time to spare we went into the Maritime Museum, a fascinating display of traditional Maori waka, stories of migrants and displays of maritime achievements made by New Zealanders. We were also there for the firing of the Midday cannon! 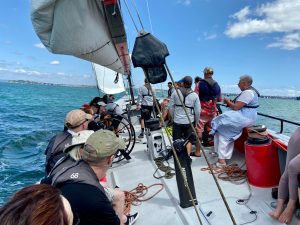 The real adventure started with an America’s Cup yachting experience in the Hauraki Gulf. A keen breeze powered us through the water, the hull slanting steeply from the pressure of the wind on the sails. The boat we were on was a veteran of nearly 20 years but was still an awesome piece of kit. Auckland is hosting the America’s Cup in 2021 and a great deal of work is being done in preparation, including significant alterations to the waterfront. The yachts to be used are also so very different with them riding high above the water on, what can best be described as a water ski.
During the course of the two hour experience we learnt much about the history of the America’s Cup and the degree of skulduggery that takes place in the interpretation of the rules, leading to seriously contested races. It is the Formula 1 of yachting. 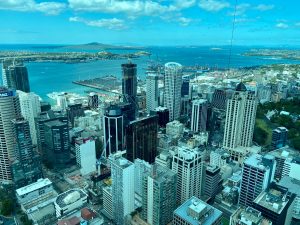 Having enjoyed our time on the water, and seen Auckland from the sea, we headed into the city and the Sky Tower for an aerial view. The lift, which rises rapidly to 220m where the doors open out onto a fabulous 360 degree vista. The most interesting view is towards the Central Business District with its array of high rise buildings and the gulf beyond. It is easy to see many of the fifty small volcanic cones that dot the urban landscape. The most recent to form is the island, Rangitoto, out in the gulf, which formed during an eruption about 700 years ago, and will be our destination the next day.
In the evening, being aware that those who have only been in New Zealand for less that twenty-four hour will find the time difference having an effect upon them, we headed out to Takapuna for a meal at the Regatta Bar and Eatery, with beautiful evening views across the bay. After the meal, tiredness began to overwhelm us and it was back to Takapuna Motor Lodge for an early night. 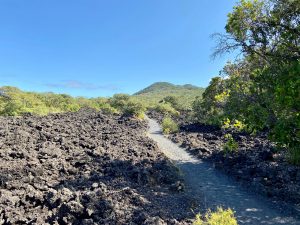 We found Uber was the best way to get around Auckland, saving us the hassle of driving and also of finding suitable places to park. It proved to be most efficient. It was Uber that took us to the waterfront the next morning to catch the ferry to Rangitoto Island. It is only a twenty five minute trip to the island reserve, which has no facilities, other than some toilets near the quay. There are no shops or cafes and there is a strict policy that all that goes on to the island comes off it, including tourists.
Rangitoto is 269m above sea level and is a steady climb up a well-maintained path over black lumps of lava. Remarkably, out of the black rock, pohutakawa trees grow. These are New Zealand’s Christmas trees as they flower in December and January. Most trees had finished flowering but we found a couple that were still in full bloom with flowers that resemble small, red, bottle brushes. 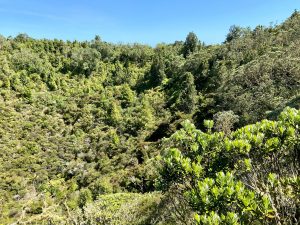 Part way up there is a diversion to a lava tube. Unfortunately, the path was closed so we were not able to enjoy following the path created by lava. Instead, we headed straight up to the top with its panoramic views back towards the city, out across the Huaraki Gulf and across to the eastern shores of the Coromandal Peninsula. The forested crater is a perfect inverted cone, almost symmetrical. After lunch on the top we followed the path around the rim before heading back down to catch the mid-afternoon boat.
I had arranged for us to meet Sophie Kavanagh and her fiancé, Vin, around the marina, but with no specific venue decided. We made our way to Headquarters on the waterfront where I decided to give Sophie a call. As I rounded a corner for a little quiet, low and behold, I bumped into Sophie and Vin. It seemed right and proper for us to make camp in Headquarters for a drink or two. While there, Ben, our son, phoned us and invited us all to the house for an impromptu BBQ. What a great way to end our short stay in beautiful Auckland. It deserves more time. Angela and I are lucky, we can spend as long as we like there but for others in the group, it can only be a snapshot; we have to move on.