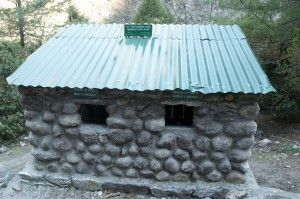 One of the new, successful rubbish bins

The Everest Trek was always known as ‘The Pink Tissue Trail’ but not any more. It is almost litter free. Every so often there are stone built waste bins segregated according to type – tin cans, plastic bottles and general waste. It is not only good to see a scheme in place but to see it working so well.

There are other differences. Virtually all of Nepal has mobile coverage and everybody has a mobile phone. Porters, as soon as they put their loads down, pull their phones out of their pockets and start communicating. Young people are plugged into their music and, as a result, there are fewer opportunities to say ‘Namaste’. 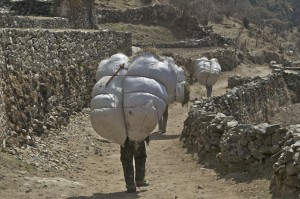 Porters in the Thami Valley

Namche has grown enormously and there is a chorus of hammers hitting stone from 6.00am to 7.00pm as yet more lodges fill in the odd vacant plots of land. In front of our lodge, Camp de Base, work is in progress building a new lodge surrounding and incorporating an existing lodge.  To one side huge lumps of rock, clearly needing to be disposed of for building work to commence, were being split and disposed of.  Under normal circumstances this would be a relatively simple task for a piece of heavy machinery to achieve.  Hear in Namche it is far from normal.  There is no heavy machinery, only young men armed with hammers and chisels.  The amount of effort these young men use is phenomenal, yet, somehow, they achieve their aim and the obstructing rock gets smaller until such time as it is no longer an obstruction.  At the end of each day there is noticeable progress, fine testament to the skill, determination and perseverance of the workforce. The broken lumps are carried to the other half of the building site where construction is taking place.  There, an army of stone dressers are chipping away, creating square edged building blocks, which, as soon as they are ready, are cemented into place.  Again the growth rate of the building is rapid and proves what can be achieved if there are enough people to working on it despite the lack of equipment.  What is happening in front of the Camp de Base Lodge is being mirrored in two or three other places in Namche.  More and more land is disappearing under buildings.  There is now very little room for camp grounds as, increasingly, people prefer to stay in lodges. This is in many respects a much more comfortable option but there is certainly less variety in diet with virtually no fresh vegetables and fruit.  At the start of the trek I made comment on how good the food was and how efficient the service.  Now that we have stayed in a number of lodges it is apparent that the menus are virtually the same with a ‘heavy’ reliance on potatoes, eggs and cheese.  Already I am beginning to tire of what is available and on offer and am experiencing early cravings for something fresh.

Internet connection is available in most of the lodges. The 21st C has reached the Khumbu. It is good to know that they still light stoves with dried yak dung.

Helicopters fly overhead constantly re supplying the increasing needs of the region but, sadly, denying many porters of work. 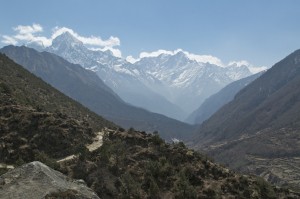 Looking back along the Thami Valley

Leaving Namche, we headed into the Thame valley walking through forests of pine. The trail was generally uphill but at a relatively gentle gradient. We passed through the village of Thamo where Ang Rita Sherpa has a house, although he now lives in America. His claim to fame is that he has summited Everest 14 times. At the next village we stopped at a lodge for tea. There we were introduced to Dawa Nuru Sherpa who has climbed Everest 12 times and will shortly be joining an American expedition for his thirteenth. He looked about 35 but was in fact 49. 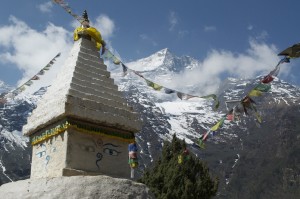 Dropping down to the Dhud Khosi we crossed the river and climbed up to the village of Thame. This valley and the villages within are much as the Khumbu was when I first came in 1993. We settled into our lodge run by the wife of Kami Temba Sherpa, the doctor at Kunde hospital. Later in the afternoon we climbed up to the monastery and watched the light change on the surrounding spectacular mountains. In the distance, to the east was the towering bulk of Cho Oyu, the world’s sixth highest mountain.

The following morning we retraced our steps. The going was good and we covered the ground well. Instead of returning all the way to Namche we took a detour up to Shyangboche airstrip and on to Kunde for lunch. 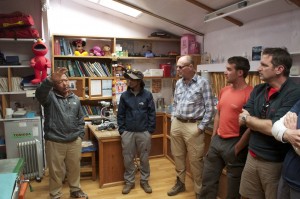 After lunch most of us went up to Kunde hospital to have a look, to meet Dr Kami and for him to tell them something of the work of the hospital. We had to wait a while while he treated some rather elderly Americans. He was very welcoming and warmly received us. He is a great ambassador for the achievements of the Himalayan Trust, a former student of a Hillary school who then went on to become a doctor after learning the skills as an assistant at Kunde Hospital.

From Kunde it was just a short walk to Khumjung and our lodge for the night opposite Khumjung School. Not only did the lodge have hot showers, it also had a washing machine in the front porch.  This really is progress.  Fraser decided to do his washing, paid his money and then spent ages trying to understand how the machine worked.  It was clearly a latest model as it kept giving out verbal instructions.  What it failed to tell him was that the machine was not plumbed in!  After much effort, reading of the handbook, support from the lodge proprietor who poured water into the machine, Fraser ended up with wet, not necessarily very clean, clothes. That evening a shield of wet clothes separated us from the yak dung burning stove. 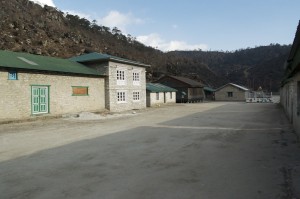 Khumjung School. The building on the immediate left is the one we helped repair in 1996.

Ignoring the temptation to do some washing, I had a very welcome hot shower and   popped over to the school to see Mohendra, the head, but he wasn’t there and it looked very much as though the school was on holiday. There were a number of children playing football and volley ball in the school grounds so I had a wander around to see how it had changed.  There are so many more classrooms and facilities, largely as a result of international fundraising from a variety of countries.

During the evening the temperature dropped but we had the luxury of sitting in the lodge with a yak dung burning stove chucking out a lot of heat while we watched Fraser’s washing dry.