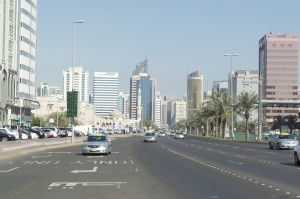 The flights with Etihad were good although the seven hours at Abu Dhabi were a bit of a pain.  Some of us took the bus into town to have a look to see what it was like.  Superb service along wide, fast roads.  We were dropped off at the bus station but that, we discovered after much wandering, was actually not very close to the heart of the city.  There are some fantastic pieces of architecture but the roads are all 8 lane highways which take an age to cross.  You can only cross half at a time so much time was spent standing in the middle of the road as cars, none of which were small, sped past at 60 miles an hour.  We eventually finished up in a Philipino bakery for bread rolls and coffee before heading back to the airport.  While we waited for a bus we were pestered to use a taxi at a greatly inflated price.  We waited for the bus which came on time and sped us back to the airport along the wide highway fringed with well manicured flower beds amongst sculpted stones.

Somehow between being given my onward boarding card at Heathrow and returning to Abu Dhabi airport the two halves of the boarding card became separated, rendering it not acceptable to security as I tried to go through passport control.  So, while the rest of the group went back into the terminal to sample the delights there, I queued for an hour at check-in to get a new boarding card.  What a delightful way to kill time.Eventually making it back into departures I met up with Mary Lowe who would be flying with us on the second leg of our journey.  I am not sure I would bother going into Abu Dabi again, if the occasion arose, although if we could have got into the centre or by the water’s edge it might have been more interesting.

Arriving in Kathmandu at 7.30pm it took an age for us to get our visas but the luggage was only just through by the time we were through.  Outside we were met by Hira and Bishnu and taken to our hotel, Hotel Tibet ….ternation… not all the letters were there.  I woke Stephen and Nathan to come and greet us and to have a beer while we waited for some food to be produced.  We waited a long time.  Stephen was clearly very tired from his week of travelling the globe.

The following morning I ventured up to the roof top restaurant for breakfast and a meeting with Gael Robertson who conducted the inspection of Happy Home for us.  It was an interesting conversation and further convinced me that we had made the right decision, although it would appear that Bishwa is beginning to take on board some of the suggestions I have made. 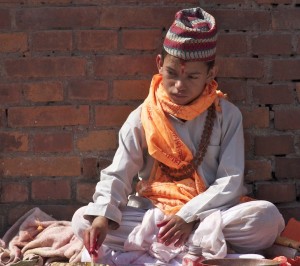 After breakfast we went to Pashupatinath to watch a few cremations and to generally soak up the atmosphere, before heading off to Swayambunath, the Monkey Temple, which was heaving with Hindu worshippers, remarkable in that it is a Buddhist site with Hindu attachments.  Leaving Swayambunath we went to Durbar Square.  Here I was able to have some new experiences for some of the palaces, which had previously been closed to the public, were now open.

Our morning tour over we went to the Organic Cafe, adjacent to the Third Eye, for lunch.  Here we met Hira again and he and I had an opportunity to discuss and plan my few days after the group has returned to the UK.  After lunch I took those who were buying sleeping bags and down jackets to Shonas before heading back to the hotel with Stephen and Nathan to meet up with Jeannie, Laura and Anna.  We sat on a roof terrace drinking beer and hearing of their stories from Nepal.  They were very excited to see us and they had plenty to say.  Tshewang joined us for a while and I was able to give him the funds he was expecting and hoping for.  The girls stayed for dinner.  The service in the restaurant was poor and we waited for an hour and a half for our food to come.  We are not staying here when we return to Kathmandu.  The hotel lacks character, doesn’t have a garden, has extremely poor restaurant service and there is nowhere near to hand where we can eat if we tire of poor service.  Jeannie has decided to give up the idea of being a doctor and wants Stephen to teach her to fly!!!  Having put the girls into a taxi I went back to the dining room to join Fraser, Simon and Nigel and continued there until midnight. 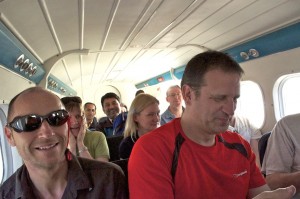 Mixed emotions on the flight to Lukla

The following morning we had an early start for our flight to Lukla.  Leaving the hotel at 6.00 we were surprised how organised and relatively quiet the airport was. The domestic departures is usually very chaotic.  Not so today.  We were all on the same flight.  Stephen and Nathan sat in the front two seats so they could take over if disaster loomed.  It was a very smooth flight but they were both impressed and Stephen kept saying he wanted a job in Nepal.  Leaving the airport we went to Paradise Lodge.  Pasang, who runs the lodge, was my first Sirdar 20 years years ago.  He doesn’t really run the lodge, Dawa, his wife does that.  She is a very strong woman who has recruited a team of young, local people to work for her.  They work incredibly long hours but Dawa is like a mother to them and they are incredibly devoted to her.  Dawa gives them skills, discipline and a brilliant work ethic which sets them up for life and probably gives them the start to adult life which will help them achieve success. Mary Lowe is staying here, having floan up the previous day, and she joined us while we waited for our kit to be sorted.  Once that was done we headed up (actually we drop a couple of hundred metres) the valley to Phakding where we were staying for our first night.  Previously I have only ever camped but in the ten years since my last visit to this region there has been a huge amount of development.  Not only did I have a room to myself but I also had en suite facilities.  The food was good and the service was excellent. 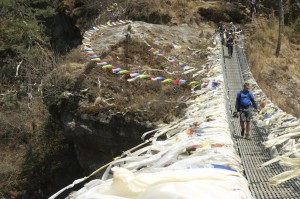 The bridge at the foot of Namche Hill

The next morning we continued up the valley towards Namche.  Robert was ill and found the going hard.  We stopped at the lodge just before the entrance to the national park run by Ang Darki.  She remembered me despite there being a ten year gap since my previous visit.  She gave me a handful of fruit as we left.  Ahead of us was the dreaded Namche Hill but before we reached it we stopped in Jorsale for lunch.  The hill does not get any easier but we did it, even Robert who managed pretty well to keep up with the rest of us. 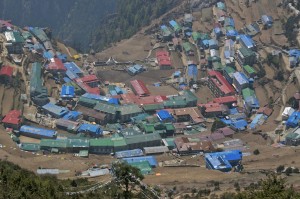 Namche has grown enormously since my last visit, with hardly a square inch of land left that has not been developed.  There are many more large lodges and virtually all the camping ground has given over to building.  There is the constant noise of hammers hitting chisels as stone is either being broken up or dressed.  Again our lodge provided us with en suite facilities, including hot showers.  How much has changed in just a few years.
I had been expecting to have disturbed nights on this trek with barking dogs but in both Phakding and Namche none were to be heard and long nights of sleep were achieved. 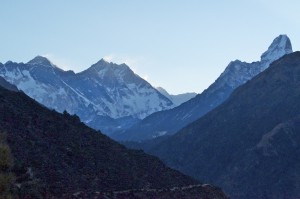 After a good, quiet night’s sleep we got up at 5.15 to go to the National Park headquaters to watch the sun rise.  Spectacular views. Considering how many people were staying in Namche it was remarkably quiet on the knoll as we watched the sun rise, bringing Everest and her neighbours into view and casting a yellow light on the peaks to our east. There can only have been three or four other people to share this spectacular experience.  Their loss was our gain. 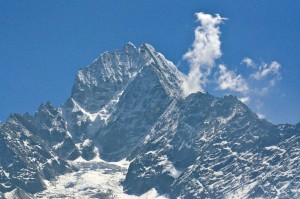 Following breakfast we then climbed up the steep ridge to Shyangboche air strip (the highest in the world) before continuing to the Everest View Hotel for coffee and chips on the terrace, looking at the view of Everest, and others, up the Khumbu.  Stephen and Nathan were fascinated by the airstrip, which is in the process of being lengthened, so, at the moment, only helicopters can use it.  There has been a lot of helicopter activity with loads being transported up to base camp etc.  Stephen fancies flying helicopters!  Then it was back down for lunch and a free afternoon.
The walking does not get any easier but when it is over the rewards are fantastic.