Ate a stone grill meal last night.  Basically, a square of granite is brought to your table with three pieces of raw meat sizzling away.  To either side there were chips and salad.  We both had a piece of chicken, pork and beef.  Cutting it into slices we ensured that it was cooked through and just how we liked it.  Then it was back to camp for a good night under canvas.  Sadly we woke to a rather cloudy morning.

It seemed appropriate this morning to climb Mt. John before we left Lake Tekapo.  Mt. John is only a climb of about 300m from the lakeshore and stands 1031m above sea level.  In New Zealand it is a very important mountain as, on the summit, sit New Zealand’s largest observatory with five telescopes searching the skies. 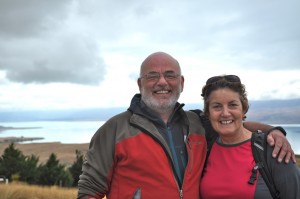 On top of Mt. John

Leaving the lakeshore, the climb zig-zags through a mixture of larch and spruce trees before opening out on to a summit dome.  There are two summits, the North Peak, which is clear of scientific equipment and the slightly higher South Peak, which is surrounded by the telescopes and has a café on the summit.  Sitting in the hazy sunshine, drinking coffee and eating a slice of ‘naughty’ each we had views all along Lake Tekapo and beyond to the still shrouded mountains.

The weather had much improved while we were on the summit and the sun began to break through the clouds.  Refreshed, we chose to take the long route back, which took us further away from the village, along a gradually descending ridge to the lakeshore, where the path followed the shore back to the village, where we picked up the car. 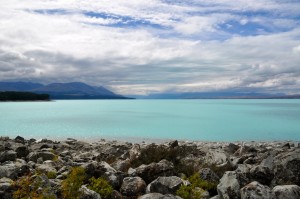 Our next scheduled stay was the village of Mt. Cook.  We drove to the eastern end of Lake Pukaki, another turquoise blue lake significantly longer and wider than Lake Tekapo.  High peaks, including Mt. Cook, surround the western end but they were all shrouded in cloud.  Turning off the main highway we drove the 40 or so km along the shore and beyond to the village of Mt. Cook.  I instantly took a dislike to it.  It looked so much like a manufactured French ski resort like Tignes.  I wasn’t really looking forward to spending two nights there, paying inflated prices.  Having picked up the phone numbers for the various establishments available from the Tourist Information Office, I was quite relieved when the response from all that we tried turned us away.  We also looked at the weather forecast for the next day and it did not make promising reading, suggesting that our planned walk up the Hooker Valley would not be a pleasurable experience.  A phone call to a farm cottage at Twizel, back on the main highway, secured us a cabin for a night, or two, depending on how we feel and what the weather does. 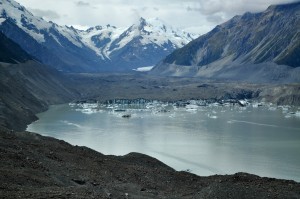 Before we left Mt. Cook. I took a couple of pictures of the mountain itself, despite parts of it still hiding behind its cloudy mask.  We had a quick look up the Hooker Valley, but there wasn’t much we could see beyond the car park, and then drove up to have a look at the Tasman Glacier, New Zealand’s longest.  From the viewpoint on the moraine, you looked up valley to the glacier snout where chunks of ice fall into the ablution lake.  The surface of the glacier is just a jumble of rock and does not look pretty at all.  You have to travel several kilometres up the glacier to see good, clean ice.  Snowy peaks surround the glacier, which I am sure would look very impressive in better conditions.  Soon after leaving the Tasman Glacier, the petrol warning light came on in the car and by the time we had driven the 50 or so km to Twizel we were on fumes!

First night of the trip under canvas and I was chilly!  What’s new eh!  Having put on a track suit and snuggled up to my human hot water bottle all was well.  YHA shower was good & our DIY breakfast sufficed.

Our summit of Mt. John was memorable for the people we met as well as the views.  An English family with 3 children were taking 48 days to travel the southern hemisphere.  Youngest daughter, Hattie took a shine to us and showed us her camera and assorted photos.  As she was about 5 she’d done well!  Quad bikes and legs excepted!!  As they left she gave us hugs….oh! charming.  We then had a conversation with a couple from S. Devon and they were equally delightful.

We have ended the day on a beef farm staying in a cabin, which has all mod cons.