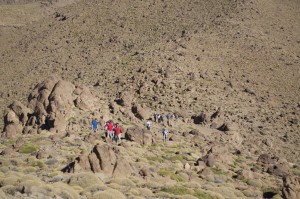 Woke up to a beautiful morning with not a cloud in the sky. Our target for the morning, Guiliz, stood out in the morning sunshine. After breakfast we set out, crossing the valley to then climb steadily up to the ridge. The summit looked quite close but the summit dome was deceptively large. As we progressed up the dome it became steeper, with lots of loose rocks about the size of large dinner plates. It was tough for the NCW students but they stuck to the task fantastically. 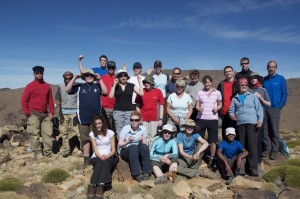 Eventually we reached the summit and had fabulous views all round. To the north the High Atlas were covered in fresh snow from the bad weather of the previous two days. No wonder it was proving quite cold at night. We spent about half an hour on the top before we set off in threes back to camp. If anything the going down was much harder, hence the trees – two sighted to each NCW student.

Coming down the dome was particularly hard. Having done the worst of it I lost my balance, possibly because I had Kate pulling on my rucksack, fell and placed my arm into a particularly prickly bush, which deposited numerous thorns into me. I remember thinking ‘I’m glad I am not a balloon’.

After lunch we left camp and continued on our trek to the next camp. We traversed around the valley, eventually reaching a high point on the ridge, which afforded fantastic views to the west of layer upon layer of ridges with a slightly varying blue tinge to them. From there it was only a short distance down to camp, another relatively high spot at just over 2600m, and quite cold once the sun had gone down.