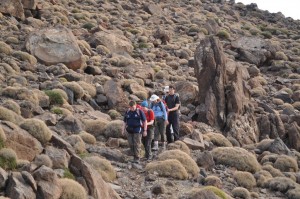 Woke up to an overcast morning where the cloud base was quite low. There was some light rain in the air. As we left camp at 8.15am there was some discussion among the crew which started to get a little heated. There was some concern about the muleteers being able to navigate in such conditions. We were told that there might be some changes to the itinerary. 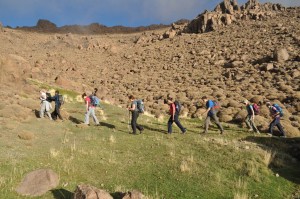 The route continued up the valley along the dirt road through several villages. They were all very close to each other and it was hard to see how they could all make a living on the land that was available to farm. In days gone by it would have been subsistence farming but now many are involved in the growing of almonds and fruit for market. Some are able to make a good living out of it. However, the tendency is that not all the family will be involved as many family members will travel to the cities to work in construction, which seems to be booming in Morocco. Whatever they earn, whether it be through farming or construction, the earnings are for the family, which maintains very strong bonds in Morocco, particularly in rural communities. Those that move to the cities often make the move a temporary affair for economic reasons but eventually return to their roots.

Eventually we came to the end of the road and had our first steep climb over rough ground. Immediately our speed slowed. No longer were the pairs able to walk side by side; the guide led while their partner walked behind holding on to the rucksack in front. Communication became vital.

The climb continued and although we were encouraged by the thought of lunch not being far away, it never came. The issue for the cooks was water and an area large enough for them to function in and for the group to sit.

As the day progressed the weather improved and we returned to a revised plan A. It soon became apparent that the terrain was proving a barrier to the expected progress and that our climb of Guiliz was not possible and we would head straight to camp. But we had to reach lunch first! Finally, we saw the tent just below the path by the stream. It was now 3.00pm. How much further was it to camp? I began to wonder if we were going to reach camp before the light faded. We took lunch fairly quickly and by the time we were ready to continue we had about 2 hours left of daylight and then it would get dark very quickly. As it turned out we reached camp just in time. The sun had disappeared behind the mountains but cast a stunning, rich light on the summit of Guiliz which still had a necklace of cloud around its neck. It proved to be quite a chilly spot. 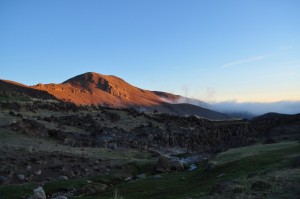 After dinner we discussed the possibility of successfully climbing Siroua (3304m). Jamal described the day, the length (it would be long), the route to the summit (the last 100m is a scramble). In the light of today’s performance, which was brilliant, we all felt that Siroua would be too much, particularly as it involved scrambling, which might be possible on the ascent but would be extremely difficult on the descent. Instead, we decided to climb Guiliz (2905m) in the morning, return to camp for lunch, before continuing to our next camp.
Richard Hymen had had charge of Humph for the day but having lost him three times during the course of the morning he did not have him for long and had the forfeit of learning the months in Berber. Rhiannon did a good job of learning the number 1 – 10. Tom was nominated for a number of reasons.