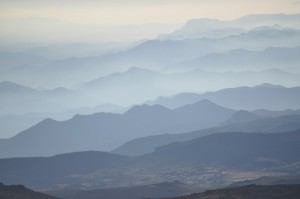 Having sorted out some currency back at the airport, we set out on our journey to Akhfamane, the start point of the trek. We started across the flat plain that surrounds Marrakech, on dead straight roads with little traffic, making quick progress. Soon the land began to rise and the road developed some bends, but still the surface was good. The only disappointing aspect of the day was the mountains were shrouded in cloud and there was potential for some rain, which materialised from time to time but not in any great quantity. After about 2½ hours we stopped briefly for toilets and for the crew to buy bread for lunch.

Lunch was at Tizi n Test, a high point in the road, in a room attached to an auberge. As we were at 2000m and the weather was not brilliant, it proved to be quite chilly and I regretted having no more than a T shirt and shorts. Lunch consisted of bread, cheeses and salad followed by bananas, biscuits and mint tea.
After lunch, having crossed the High Atlas, we descended to a flat plain again before more mountains, the Anti Atlas, appeared and the clouds cleared. We had another stop to buy 110 1½ litre bottles of water at Talioune, before we took the last short leg to camp. However, it was not all straight forward as, for the last 7km, we transferred into ancient Ford Transit vehicles as the road was a little rough and there was a river crossing.
We arrived at camp in time to help put up the tents as the light was fading rapidly. Soon everybody was sorted and we had dinner at 7.30pm, which consisted of lentil soup, vegetable tagine followed by pineapple and banana. The best nominations for the ‘wally’ award was Rhiannon. During the day she turned round and hit Caz, thinking she was hitting Jordan. For that she was given Humph, a soft toy camel, to look after for 24 hours. Tracey came a close second for getting up early, not having adjusted her watch to Moroccan time