Still on the case of Tashi Waldorf I managed to get through to somebody at the school. They didn’t really want to speak to me but pass me on to Eva via a mobile number. Because I was not using a local sim card all calls were blocked from my phone. It worked so much better in the mountains. Hence any calls I made had to go through the hotel reception. Only a small hurdle. I have a number, I have a helpful receptionist. I will soon be able to complete the mission to give some money away. That is if the number I had been given was still in use. Another stone wall. I decided not let this ruin my day so I put it at the back of my mind and went on some retail therapy before meeting Kanchhi Maya and the children tor lunch. I had a wonderful time buying things for Molly and Ben and Kelly’s impending family addition. I quickly found things for those I care most for.  Depositing my goods back at the hotel I returned to the Northfield Cafe to meet my lunch partners.

Kanchhi  Maya, Tshering and GN joined me at the Northfield. Kanchhi presented me with a basket of flowers. What I would do with them is beyond me. It is not the first time she has done this but the gesture is one if kindness and friendship. Chering has grown up to be a beautiful young woman. She is now 16 years old and is preparing to go to Trinity College to do her A Levels. She talked freely about her ambitions to become a doctor and is committed to learning as much as she can so that she can develop her potential fully. She gets that from Tshewang, her father, whom she clearly idolises.

GN is a lanky 13 year old who has limited conversational skills as a result of his present hormonal state. He looks like a younger, taller version of his father, having the same smile. He is unsure of his future but seems to be veering towards some sort of engineering, following mother’s natural inclinations.

The conversation flowed freely while we waited for our food and it was largely led by Chering who was so eager to talk about her many plans. She is likely to want to train and qualify in the UK, the States or Canada but is adamant that she will return to Nepal once she has done so as she has a social conscience, not unlike get parents in that respect.
We chatted about Tshewang always working and never relaxing. Having had a bit of a heart scare a few years ago he needs to let go a little. I discovered, to my horror, that he does not have a deputy head he can off load some responsibility to. He could not join us today because the school is closed post exams and he is busy marking papers, writing reports and overseeing painters decorating the school. I think a lot of it is to do with image and prestige within the school community; he is the head and he is in charge of everything. It would do him good to find a colleague he trusts and values to take some of the burden and responsibility from his shoulders. I passed on my words of wisdom to Kanchhi Maya and subsequently in an email to Tshewang but it will be like water off a ducks back.
The conversation continued to flow after the food arrived and it took an age for it all to be eaten.

I had a couple of favours to ask Kanchhi Maya – 1) could she find out anything about how I might be able to make constructive contact with Tashi Waldorf, and 2) where I could buy some leaf plates and bowls from for my ‘Tastes of Indonesia’ lunch? The former she would let me know about and the latter was easily solved if I had time to go with them. I had nothing else to do so it was agreed that after we finished at the restaurant we would go shopping together. GN took this as an opportunity to escape and go home on the bus but before he went I popped into a shop at the Northfield run by an organisation called ‘Beni’ creating a number of hand crafted items from recycled rubbish. I had read the leaflet before but I hadn’t seen the finished products. They are brilliant and range from bags of all shapes and sizes to wallets, to stools, to place mats, door mats etc. I bought Chering a shoulder bag made from an old rice bag and for GN I bought a wallet, using amongst other things old sweet wrappers. All the money goes to supporting the numerous women’s cooperatives set up to collect, clean and create. 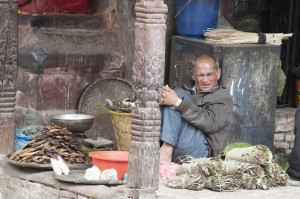 As we left the tourist area of Thamel the streets became narrower and a lot more crowded. Now all the faces were Nepali. Eventually we arrived at a Newari vegetable markets where they sold packs of plates and bowls of a variety of sizes. They came in packs of one hundred and are perfect for the purposes I have in mind. I just hope I can get them home safely in one piece.

Kanchhi then insisted on taking me to another shop to buy me a jumper. She has always wanted to buy me one but wanted me there so she could get the size right. The shop was not large but it must have had at least 10 sales staff, mostly attractive young women, waiting for a customer to brighten their day. Kanchhi went straight to the only male sales assistant who looked me up and down before producing a normal V knecked jumper of excellent quality. I tried it on. It was a perfect fit and I liked the colour. Taking it off became a bit of a spectator sport. I needed Kanchhi to hold my shirt to stop it riding over my head exposing myself to the onlooking, amused sales girls. Kanchhi refused to help, cracking up in fits of laughter. It was like going shopping with my mum but more fun. Eventually I managed to get the jumper off and, at the same time, retain some dignity. At the entrance to the shop there was a sign saying ‘Fixed Price’. That did not stop Kanchhi from entering a bartering duel with the salesman who crumbled under her forceful charm. 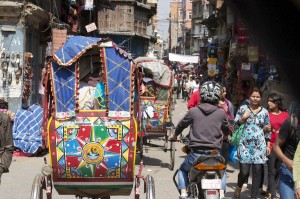 Busy narrow streets where pedestrians always have to be alert

Then we had to visit a shoe shop to buy shoes for Angela. It helped that I knew her shoe size and it proved quite a painless ordeal. Walking back through the extremely crowded streets, avoiding motor cyclists and rickshaws while ladened with several shopping bags, proved interesting and it was only when we returned to the tourist area that the streets, which I normally associate with crowds, became less of a problem to walk along.

We returned to the Northfield so that Kanchhi could collect her motorbike for her and Chering to return home. It had been a delightful few hours in good company and some interesting experiences. After they left I popped into the recycled goods shop, gave the assistant a lovely basket of flowers and bought some more of her wares.