In the morning Simon greeted me with the news that Rob was suffering badly with D & V, not really surprising after the excesses of the previous day.

Saying farewell to Hira and Keyoum again, we boarded our bus for the border.  Occasionally stopping for Rob, we arrived at the customs post after an hour and a half.  Rob was in a bad way and Simon seemed to be going down fast.  For the rest of us the process seemed far less arduous than on the way in but it still took us an hour and a half to pass through.  In that time I had to visit the toilets once and that was enough; they were some of the worst toilets I have ever seen and it was nothing to do with Rob and Simon.  How they coped I shall never understand.  Before we left the compound our passports were checked  again, and again a few hundred metres up the road, on the way up to the actual border. 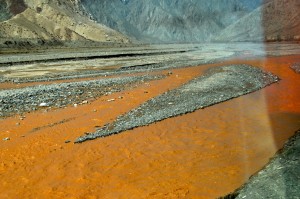 In the main the slopes were clear of snow, certainly on the lower hills, and the rivers were running with orange water, a sure sign that spring was on its way in these hills.  There was much less snow and hardly a lorry in sight as we approached the top of the Touroget Pass and the actual border.  Fortunately the two buses from Asia Mountains were waiting for us and the transfer was painless, particularly important for Rob and Simon who were really suffering. 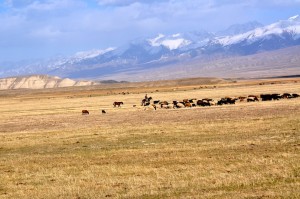 What a transformation from white scape to agricultural scene

Without the snow the road was unmade and uneven, making the journey to Naryn a long, bone rattling affair.  Bring back the snow.  The high altitude plateau was now alive with life.  Where, three weeks ago there had been a white scape, there were now herds of horses, cattle and flocks of sheep and goats grazing and tended to by farmers on horseback.  Woken from their winter sleep, marmots gambolled in the warm sunshine.  It was an idyllic scene, always with the backdrop of snowcapped mountains.

Naryn looked very different without snow but the hospitality was as warm as ever, even if the room temperature was lower: the state heating was turned off on the 1st April.  We put Rob and Simon to bed and I gave them my Sigg bottles for hot water bottles.

The following morning they felt much better and much more able to cope with the remaining journey to Bishkek.

Leaving Naryn, we crossed one more pass before we started our descent to the plains below. 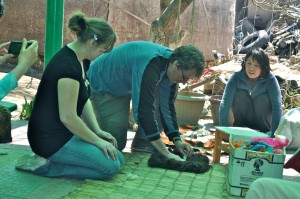 After a couple of hours we stopped at Kochkor again, this time to visit a women’s cooperative felt making cottage industry involving 200 of the village women, and for lunch.  We were shown the processes involved, the beating of the unwashed wool, the laying in layers, the creation of a design (Charles had a go at this), the rolling into a reed tube and tying a cloth around it, pouring hot water on the tube and then dancing or jumping on it for about 20 minutes.  We all had a go at the various stages.  Once unwrapped, soap was applied to both sides and the felt thoroughly washed.  It proved to be really resilient and could be pulled and wrung out without fear of it falling apart.  The fibres had, remarkably, all knitted together. 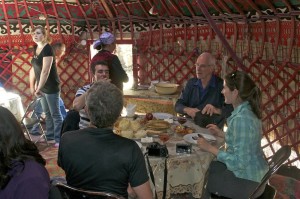 Lunch in a yurt

Process completed, we had lunch provided in a yurt in the garden.  For a temporary structure it was incredibly firm  and was extremely comfortable inside, with carpets on the floor and four tables laid for lunch.  As with most meals we had experienced on this journey, the food just kept coming.  There was far too much for our shrunken stomachs.

After lunch we visited the shop and most of us were well disposed to spending some money on presents and souvenirs, partly, I suspect as a way of thanking them for the hospitality but also because we were not put under any pressure to buy anything.  The products themselves did the hard sell. 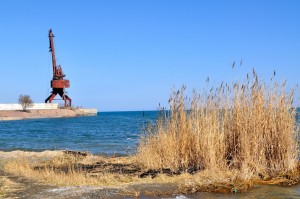 Carrying on with our journey we took a detour to Lake Isyk-Kol, a huge expanse of water (the second largest mountain lake in the world after Titicaca) where the Russians had a torpedo factory and carried out tests on the lake.  Typical of most industrial sites in Kyrgyzstan, it now lies derelict and testimony to a past under Russian control.  The situation of the lake is superb with snowcapped mountains all around.  It has a much better future as a tourist destination, once the economy can allow investment.

The final leg of our journey took us to Bishkek.  The sunshine was warm, leaves out on the trees, fruit trees in blossom, men fishing in the river running parallel to the road and marking the boundary with Kazakstan, and couples picnicking on the river bank.  Such a different picture through the window of the bus to the one we had only three weeks previously.  In just three weeks Kyrgyzstan has been transported from winter to summer. 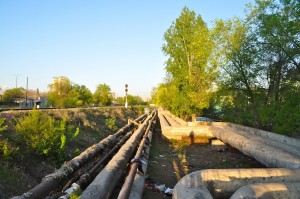 Somehow, even the asbestos pipes look more attractive in summer

In Bishkek the tree lined streets were green, people wore summer clothes and the hotel garden was bathed in the perfume of lilac.  Bishkek looked a lot more attractive.

We had come full circle and it was time to go home.