The drive from Kaikoura to Hanmer Springs passes through some very pleasant countryside with mountain range after mountain range, the higher peaks streaked with snow from the recent storm. We took a slight detour to explore the Mt. Lyford ski area but there was very little to see other than a lot of sections for sale and magnificent log cabins in those sections that had already been developed. Dropping out of the mountains we crossed the Waiau river basin before entering another mountainous region on the approach to Hanmer Springs. 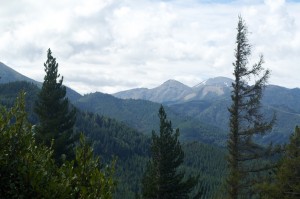 Hanmer Springs is a pleasant little town at the head of a valley surrounded by a wall of mountains, the main peak being Mt. Isobel (1342m). Large areas of the slopes are covered with plantation forests, others with traditional forests indigenous to New Zealand and more as open grazing pasture, now parched after the dry weather of recent weeks. There are numerous things which draw people to the village. Walkers and mountain bikers enjoy the mountains in the summer, skiers flock here in the winter when the slopes are covered in deep snow, adrenalin seekers come for jet boating, white water rafting and bungee jumping among other similar activities. What draws people at any time of year are the hot springs in the centre of the village. A series of thermal pools with temperatures ranging from the mid thirties to low forties all containing therapeutic qualities. Attached to the centre is a spa where, for a fee, you can book various treatments to remedy ailments, rejuvenate or simply to give yourself a little pampering.

We booked a two day pass and enjoyed some time venturing from one pool to another and people watching. There were a lot of people of a certain age.

In the evening we ruined everything we had tried to achieve in the pools by eating a superb Indian meal at Malabar.

Tho following morning we pottered around the village before climbing Conical Hill overlooking the village. The bulk of the climb is on a winding path through a plantation of Douglas Firs. They clear for the summit affording views of Hanmer Springs and the surrounding countryside.

Afterwards, while Angela enjoyed the pools again, Stephen and I drove a few kilometres out of town to the Thrillseekers centre where we were going to go jet boating. It was quiet. Nobody was taking the plunge from the bridge over the Hanmer River and there was an end of season feeling about the place. Judging the age of the majority of people enjoying the pools, there were not many who were either young enough or inclined to participate in any of the activities on offer. 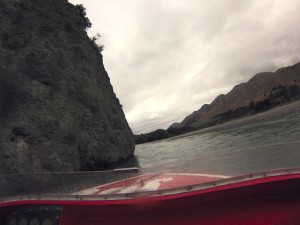 Jet boating. Only the video will give an idea of speed and drama.

Our jet boat was an eighteen seater but there were only six of us, which was great because it meant we could change places so that we could enjoy the experience from different positions in the boat. Jet boats are remarkable toys. They have two 250 horse power engines which suck in water and expel it at a rate of 350 litres per second. This allows them to travel at speeds up to 100kph in water as shallow as 10cm. Each jet is independent of the other and it is this that makes them so manoeuvrable.

Our journey took us for 13km through the Hanmer Gorge in less than nine minutes, steering around rocks, skirting close to cliffs, and performing 360 degree spins. Having covered the distance we returned up stream, passing our starting point and continued on to a braided section of the river close to the village. We then returned to the jetty below the centre, having spent forty minutes rushing up and down the river. 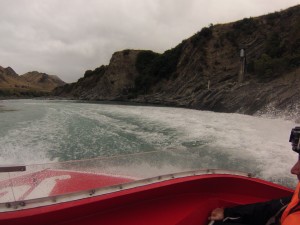 It was thrilling to be travelling so fast through the water and to get so close to walls of rock and boulders within the river, but at no time was it scary. Perhaps if it had been a narrower gorge with more obstacles I might have been more concerned.

Adrenalin rush over we joined the rather more sedate po dwellers while Angela enjoyed a spa session.

All too soon Stephen’s time with us in New Zealand came to an end. Leaving Angela in Hanmer, I drove Stephen to Christchurch Airport for his flight back to Indonesia. It was a beautiful morning with clear skies but occasional bands of mist hugging the hillsides. The early morning colours were beautiful. Sadly no time to photograph. 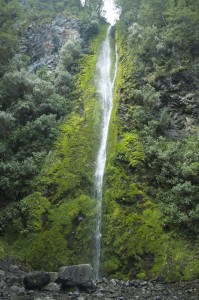 Having returned to Hanmer, Angela and I took a walk following Dog Stream up to Dog Stream Waterfall, a column of water that falls 41m high up on the slopes of Mt. Isobel. The walk took us through one of the indigenous forests I mentioned earlier. Many of the trees were honey trees, so called because the sap smells of honey and attracts bees. The bark of the tree is black, making it look as if it has been burnt by fire, but no such occurrence has taken place. The blackness even covers the ground, spreading out from the base of the tree. The smell of honey us quite strong and bees in their thousands are attracted to them. There is a constant hum in the air.
Not too much water tumbles over the fall at the moment but it is not too difficult to imagine it with more. As impressive , if not more so, is the vivid moss clinging to the rock down the length of the fall.

Tomorrow we head west, travelling through the Southern Alps to the west coast for a couple of days.