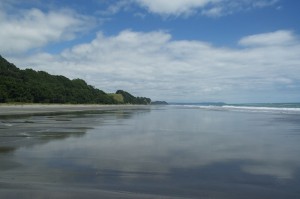 Knowing we had a long drive ahead of us we got up early and were on the road by 8.00am. For the first hour the road twisted, turned, climbed and dropped to such an extent that we seemed to cover very little distance and I began to fear that the journey was going to be tediously long. Luckily, once we had reached Waihi the road became straighter and progress was more promising. We wended our way around the coast to Tauranga, which brought us to the huge Bay of Plenty following the lengthy north coast renowned for long expansive beaches. Inland, Rotorua was not too far away and volcanic cones could be seen to the south. Out in the bay more volcanic islands rose steeply out of the sea. When we reached Opitiki we headed inland through the Waineka Gorge, a beautiful tree filled cleft cut into the hills. Having climbed to almost 1000m we began our descent towards Gisborne. The countryside changed from forested mountains to agricultural grassland, and then, nearer the coast vineyards and fruit orchards. We easily found our motel on the outskirts of town. It was a more traditionally built set of low buildings, which, while comfortable and fully equipped was a little dated and in need of a refurbishment. It did have a pool, which would prove useful later in the day. Driving into the town centre we looked for something by way of a late lunch. Town did not seem to have much to offer but we did find a nice waterside restaurant and bar by the port that could only do us a plate of potato wedges lathered with cheese and bacon. It was now mid afternoon and I was happy to eat anything by this stage. 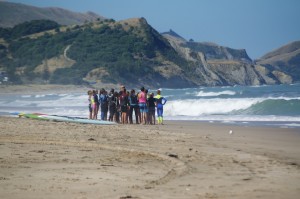 Weighed down by potato wedges we decided to explore the beaches. We had already been told that the beech closest to town was not as good as Wainui, a short distance to the north. Being almost the most easterly point of New Zealand this beach was exposed to the full force of the Pacific Ocean. Today the weather was calm, yet still decent waves rolled in, perfectly suitable for an after school surfing lesson for twenty teenagers. They used so much energy in the hour of their lesson it is unlikely that they would have any energy to do their homework in the evening. I was tired just watching them. It was a lovely beach. Before heading back to our motel for a swim we climbed up to the view point at Titirangi Park, overlooking the harbour and the town. Lots of people were running up and down the various routes in the park, some pushing babies in buggies. It was really quite steep and some sections were long flights of steps. Our reason for going to the top was not to get fit but as I said before, to get an impression of Gisborne. 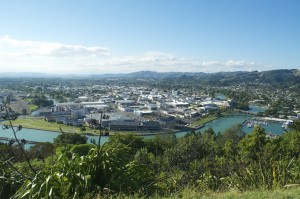 In 1769, Captain Cook first set foot on New Zealand soil in Gisborne. He needed supplies for his ship, the Endeavour, and seeing a Moari settlement there thought it a good place to land. However, he mistook the greeting he was given (presumably a Haka) and interpreted it as a threat. He left quickly without replenishing his supplies and named the bay the Bay of Poverty.  Today, Gisborne has a population of 34,000. The port, which was immediately below us seems to be a major exit for the logging industry, with huge stock piles of newly felled tree trunks. On the other side of the river flowing into the harbour is the town. It is very much a single storey town with hardly a building having a second floor. The town lacks character and there are no buildings worthy of comment. It is not really a tourist town. However, its modern claim to fame is that it is the first town to see the sun rise in the morning and, therefore, the first town to see in the new year. Despite it being February there were still adverts in town, either left over from last new year or prematurely advertising the next, where over one hundred acts perform on five stages.

The foot of Titirangi Park is surrounded by an estate made up of mainly Moari people, living in quite ordinary houses. However, the Whangara Marae, or Moari meeting house is one of the finest in New Zealand.

The following morning we left quite early for the relatively short drive to Napier, the Art Deco capital of the world. En route we came across the Merere Hot Springs, so we made a spur of the moment decision to stop and take a look. It was five to ten and not yet open, which gave us five minutes to read the information boards and giggle at the spelling and punctuation mistakes. We were the first visitors of the day so we booked for a hot pool session. Walking up through the forest was fabulous with such variety of trees and the sunlight shafting through the foliage. 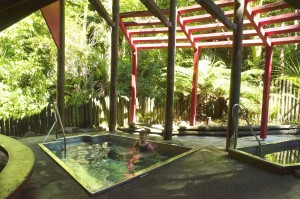 There were three pools, a very hot one, a medium hot and a cold plunge pool. I tried the very hot one one first but it was just too hot so I acclimatised myself in the medium pool. After a while I was able to cope with the hot pool. I was soon joined by a Maori woman while her husband joined Angela in the medium pool. My pool partner could hold a conversation and the longer I stayed in the hot pool the more peculiar I felt but I did not wish to appear rude by leaping out mid conversation. Eventually there was an appropriate pause which allowed me to climb out and plunge into the cold pool.

Visiting the obligatory shop, run by a retired man, we tried to have a conversation with him but it proved very difficult to understand him as only about every third word was coherent. I wonder if he was the one who wrote the information boards?

Continuing our drive I could feel my feet burning from the scalding effect of the water.

Arriving in Napier in good time we spent the afternoon in the newly built museum learning about the 1931 earthquake that destroyed the town and killed 256 people. The most graphic detail came from a film of survivors stories. 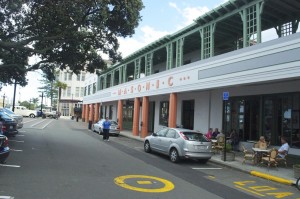 I have never really been a fan of Art Deco, largely, I think, because it is often seen out of context. Here, in Napier, everything is Art Deco and it looks very attractive. We were staying in the Masonic Art Deco Hotel and as the name implies is was all as it should be. Outside cars, beautifully restored and maintained, from the 1930s were parked and available for hire, with a driver, for the Art Deco tour. Shopkeepers, in shops which specialised in the style were dressed appropriately. There is a certain decadence, even frivolity, about the style and we felt it as we sat on the first floor terrace of the hotel, overlooking the street below, drinking wine. Remarkably this was our own wine. It must be one of the few hotels in the world that allows you to consume your own beverages without having to purchase from the hotel in the first place. 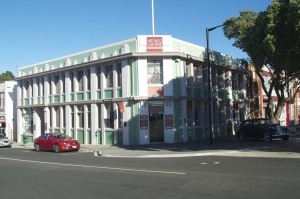 Having eaten we took an evening stroll through the meticulously manicured gardens on the sea front, with trees decked with coloured lights casting their glow over the flower beds beneath. Napier proved to be everything that Gisborne had not been. The buildings were interesting, it seemed to welcome tourists and was more geared up for them. A cruise ship was in harbour, so clearly they are used to mass influxes of people. It was a town that was cared for and had been lovingly restored from the disaster of 1931. I liked it. It was quirky. Sadly, the only thing that let Napier down was the quality of the beach, it was a grey shingle, such a contrast to the many golden and white sandy beaches we had encountered so far.

The following morning we drove the 300 plus kilometres to Wellington for some family time.