For our last evening in New Zealand we visited some friends from the UK who emigrated four years ago. Their house was badly damaged in the earthquake and when we visited them two years ago they were in rented accommodation awaiting the repair work. Two years on they are living in a cabin in the garden and the only progress is that the house has been condemned. Liquifaction has made the ground too unstable and piles would have to be sunk 13m for there to be any stability. The cost implications are not worth considering. Eventually, once all the insurance issues have been sorted the house will be pulled down, the ground made stable, and a smaller house built on the site. The cabin will then be moved. Where? They have bought a six hectare vineyard north of Christchurch and the cabin will be guest accommodation. Exciting times lie ahead for our friends. 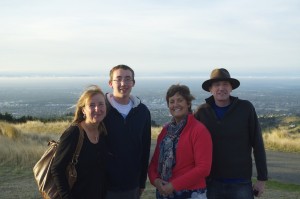 In the evening we drove over to some hills that separate Christchurch from Governors Bay and Lyttleton Harbour. The roads are far from perfect and there are engineering projects going on just about everywhere. In the earthquake all the drains and sewers were fractured. Water pipes were split and all the things which we take for granted were disrupted. Often, the road surface dropped while things like drain covers and manholes were pushed up. Drivers have to be aware of these hazards all the time. Climbing to the top we were given fabulous views either side. Inland we looked over the city towards the mountains beyond. Unfortunately a layer of cloud prevented us from seeing the snow capped peaks of the Southern Alps. Looking the other way we looked down on to Governors Bay, Quail Island, Lyttleton Harbour and over towards the hills of Banks Peninsular and Akaroa. The waters of the bay had the smokey blue waters we have become so accustomed to.

Descending the hill we adjourned to the pub for dinner.

Our last morning dawned cloudy. Having packed and loaded the car ready for the airport, we took the bus into town. Last time the central square mile was cordoned off but now it is all much more accessible. I guess being able to see the devastation at close quarters guaranteed I would feel quite depressed at the lack of progress. Some work has been done. New hotels are up and running along with garage sale rooms, all franchises with corporate money supporting them. Sadly, that meant that there were a huge number of buildings and businesses which had seen no progress in the last three years. Beyond the 185 people who were killed so many more lives and livelihoods have been ruined. 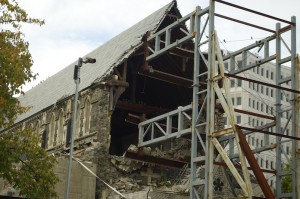 The ruins of the cathedral

The one building we have heard most about is the cathedral, the tower of which collapsed in the quake and caused a fair proportion of the fatalities. Nothing has been done other than to shore up the remainder of the building while decisions are made. The building as it shakily stands is not safe and to make it safe would cost a fortune. On the one side are the practical minded who want it pulled down but on the other side there are a great many emotional people who want it either restored or left as a monument of remembrance. In the meantime it stands as a sad reminder getting sadder as time and nature gain a hold on it. It is really quite a depressing sight. 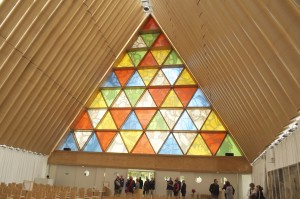 The interior of the new cardboard cathedral

On a more positive note, a little way away, is a new temporary cathedral made of cardboard. It is a remarkable building full of light, hope and promise. It is made of a series of cardboard tubes with steel rods up through the middle. The rods are flexible and there are three tubes per rod also allowing for movement and flexibility. Indeed there are signs of movement in the joints between the tubes. Over the top, at a very steep angle, matching that of the tubes, is a perspex roof, again flexible but also allowing a lot of light to enter the building. At one end virtually the whole of the triangle is made up of stained glass or a modern equivalent. The pulpit, the font, the Lady Chapel, the choir stalls are all made of cardboard tubing, although smaller in dimension but resembling the tubes used by carpet manufacturers. 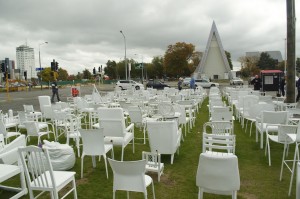 Dotted around the city are a number of art installations, vast end walls, now exposed, with colourful pieces of artistic work. Some are better than others, but the one that hits home the hardest is a display of 185 white chairs of all shapes and sizes,including a baby’s carry chair. Each one represents a loss. people are invited to sit in them and contemplate. Where it hits hardest is, if, in your mind, you replace each chair with a person you begin to understand and appreciate what 185 looks like in reality. 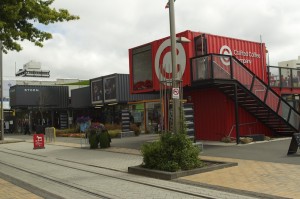 Many sites, where buildings have been demolished , are now car parks, although not many cars seem to occupy the spaces. Considering it was a Saturday morning the centre of Christchurch was eerily quiet. Many of those we saw were tourists, like ourselves, moving quietly from one devastating scene to another. The people of Christchurch seem to restrict their presence there to specific places, the new shopping mall and the many container coffee houses that have sprung up in an effort to bring some life back to the city centre. These are remarkable structures, linked together like Lego to make up an interesting 3-dimensional building. Some shops, in order to get back on the street have copied the style and it makes for some interesting buildings, even if they do turn out to be temporary. 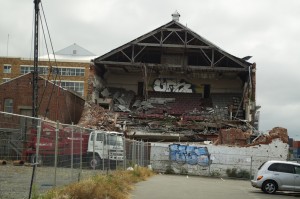 For all the positives there are negatives to both depress and shock. Part of the High Street, cordoned off, has not changed since the day of the earthquake and the cordons were put up. Another building, once a cinema, shows the seats, littered with debris, looking out on to the devastation where the screen had once been. Nothing has been done to these buildings and many others like them and you have to ask yourself, ‘How long will all this take?’ It is a huge project and one that will last for many years to come yet.

I was pleased to catch a bus to take me out of the city centre and away from the scene of destruction and human misery, despite the fact that it would mean that I would have to go to the airport and leave New Zealand. We have had an awesome time, done and seen so much. With the exception of the scenes in Christchurch, there is not a bad view in New Zealand. It has everything anybody could wish for. There is such beauty here from dramatic coastlines, majestic mountains, stunning waterfalls, fascinating wildlife, a great climate that can be extreme at times, adrenalin activities, peace and quiet, and of course we have family and a beautiful new granddaughter who will entice us back time and time again, I hope.