In three weeks time I shall be taking a group around the Three Castles Walk over a weekend. I needed to have a look at it myself so set out to complete the 19 miles or so in one day. 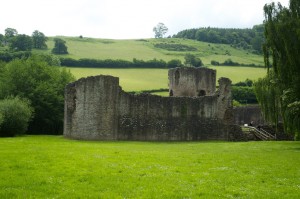 It was a beautiful Saturday so I drove over to Skenfrith, the site of the first castle. Setting out, I had a number of thoughts going through my mind. I had heard that the route was not very well way marked. I had heard that farmers like to put their bulls in the fields you have to pass through. I thought of all the protective dogs I was going to have to pass and I thought about the distance I had to cover. It is not a huge distance but I am beginning to find, as age catches up with me, that long days have a negative effect on my joints.

With the exception of the last thought I need not have worried. The route was well way marked and the couple of occasions I did go wrong was down to me not following instructions closely enough. Hardly a cow, let alone a bull, was to be seen and those that I did see saw no interest in me at all. Even the dogs had signed a non-aggression pact for the day and simply rolled their eyes as I walked past. 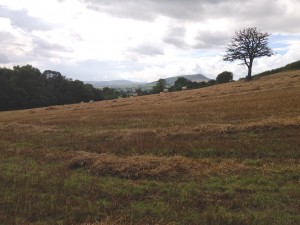 The harvest in with Blorenge and the Skirrid

It was a thoroughly good walk with some outstanding views of Blorenge, the Skirrid, eventually Sugarloaf and the whole of the Black Mountains all to the west, and in the closing stages of the walk distant views of Penyard above Ross, May Hill and the Malverns.  As good as the views were, it was the smaller pleasures that I came across that made this walk so good – the birdsong from the abundance of birds in the hedgerows, many too camouflaged to identify, a family of buzzards circling on thermals above a newly harvested field with the young mewling their plaintive cry, dragon flies darting in the air, rabbits dashing for cover as I approached, sheep so busy eating that they did not notice me until the last minute and then scamper in fright, grasshoppers playing dare, seeing who could wait the longest before my foot stepped on them but always making an escape, butterflies in profusion of every size and colour, some camouflaged for protection while others were vivid blue, thistle down floating lazily in the breeze looking for somewhere to settle and the sound of farm machinery bringing in straw or harvesting a bumper crop of oats. It was beautiful and there was always something to take your mind off the ever increasing aching limbs. 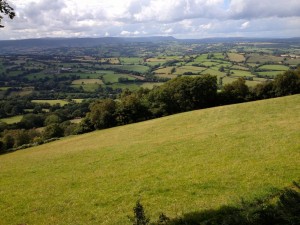 The patchwork of fields with the Black Mountains in the distance

The walk to White Castle was relatively easy, never particularly hilly but undulating. It was warm, particularly in the lea of a hill so it was always a welcome relief to expose myself to the breeze every-so-often. It took me a little under three hours to reach White Castle. With a group it will take longer as I took no breaks at all and they won’t be under any time pressure as they won’t be doing the full circuit. The only pressure they may feel is if they wish to visit White Castle Vineyard at the end of the day, before it closes at 5.00. Of the three castles, White Castle is the only one that demands an entry fee and it often has weekend activities. While there I saw wandering minstrels and maids, who, sadly, I discovered won’t be there in three weeks time. 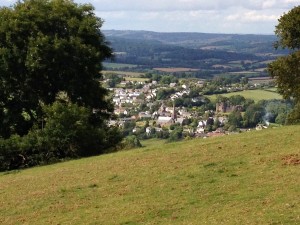 The village of Grosmont with castle to the right

Moving on the route began to get more hilly, but by the time I reached the finish point between Lower and Upper Green for our next venture on this walk I was satisfied that it would be a good day well within the capabilities of the group. However, I was beginning to feel less comfortable. There are so many stiles on this walk that I was beginning to get cramp every time I hoisted myself over. I was slowing down, so this middle third, supposedly slightly shorter than the first third, seemed to be taking a long time. The hills became longer and steeper and I was beginning to run low on water. The climb up to Edmund’s Tump was hard work but it was followed by a long ridge walk through woodland, which helped cool me down. This was followed by a long, knee jarring descent into Grosmont. By the time I reached the village, I was not interested in the castle but the village shop where I bought water and immediately sank 2 litres. The village pub was a few doors away but I had to resist; I knew that if I sat down for a pint I would not want to get up again. I still had the final third, all be it slightly shorter again, to complete. 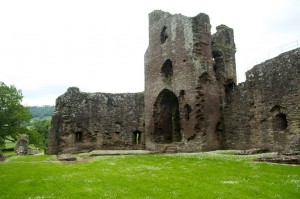 There was another long and punishing climb out of Grosmont with numerous cramp inducing stiles. Leaving the fields the route takes you through woodland, still climbing, but eventually brings you into another field, whereupon cresting the hill you can begin to think about the finish. The path then follows the ridge line before descending to the valley floor. It is on this section that you begin to come across another way mark for the Monnow Way, and the last couple of miles brings you in touch with the River Monnow, a delightful stretch of river before finally returning to Skenfrith. As I sat by my car eating the remains of my lunch the noise of children at play behind the castle walls could be heard. Or were they at play? I suddenly found myself under attack as a football came flying over the castle walls, bouncing a few feet from me. I was too tired to send it back and eventually a dad came from the castle to retrieve it. This just highlights the differences between Skenfrith and Grosmont with White Castle. How fabulous that families can play unrestrained in a medieval castle.

It took me nine hours and fifteen minutes and I can only have stopped for a total of twenty minutes throughout the day. It is right to do this over two days; I certainly would not do it over one again. Remarkably, I saw not another soul all day!

As I eased myself into my car the raindrops began to fall bringing a damp end to a glorious day. Hurricane Bertha was on her way.