I could not have had two more contrasting flights. The one from Birmingham to Istanbul was far from full and I had two empty seats adjacent to me. I didn’t know what to do with all that space. By contrast, I was hemmed in to the body of the plane by a very large lady who spilled out over the arm rests either side of her. As I was sitting by the emergency exit there was no way I was going to be able to open my tray table from within the arm. Not that I wanted breakfast at two in the morning.

We were met at the airport by Alex, our guide, and whisked us off to the Art Boutique Hotel in the centre of Tbilisi. Everywhere you looked neon signs pointed to casinos and night clubs and, despite it being gone five in the morning, there still seemed to be people around the entrances to these establishments.

I had arranged for some rooms to be available so that we could, at least, snatch a couple of hours sleep before hitting Tbilisi.

Breakfast in the hotel lacked interest.

At 10.00am we all gathered in reception, those who had stayed elsewhere, joining us.

Alex told us he had rearranged the itinerary for the day and was first going to take us to Jvari Church and Svetitskhoveli Cathedral, both UNESCO World Heritage Sites. We were due to visit them on our last day after a ten-hour journey, which he felt would not be the best circumstances to enjoy them. 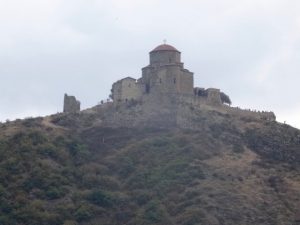 A forty-minute drive out of Tbilisi took us to the very prominently placed Jvari Church, perched at the top of a very steep hill overlooking the confluence of the Aragvi and Mtkvari Rivers, and the town of Mtskheta. The church is one of the holiest sites for Georgians and marks the spot where King Mirian erected a wooden cross soon after his conversion to Christianity in the 4th century. Inside, in the centre of the church, is a huge plinth on which there is a large wooden cross. There is little else inside. It’s significance and position are its important features. 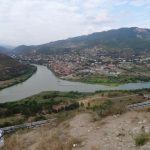 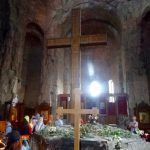 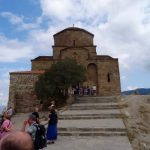 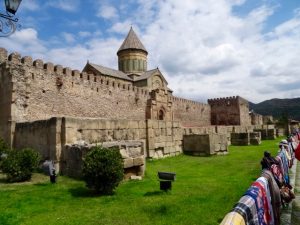 From the car park in Mtskheta we walked through narrow cobbled streets of shops, cafes and restaurants to Svetitskhoveli Cathedral. The legend behind the church is that a Georgian Jew witnessed the crucifiction of Christ and returned to Mtskheta with Jesus’ robe. When his sister, Sidonia took it from him, she immediately died in a passion of faith. The robe was buried with her, but, as time passed, the exact site of her burial was forgotten. When King Mirian built the first church in Mtskheta, the wooden column needed for the centre of the church could not be removed from the ground. After an all-night prayer vigil, the column miraculously moved of its own accord to the robe’s burial site, upon which the church was built. The column has reputedly performed many other miracles. Svetitskhoveli means ‘Life-Giving Column’. 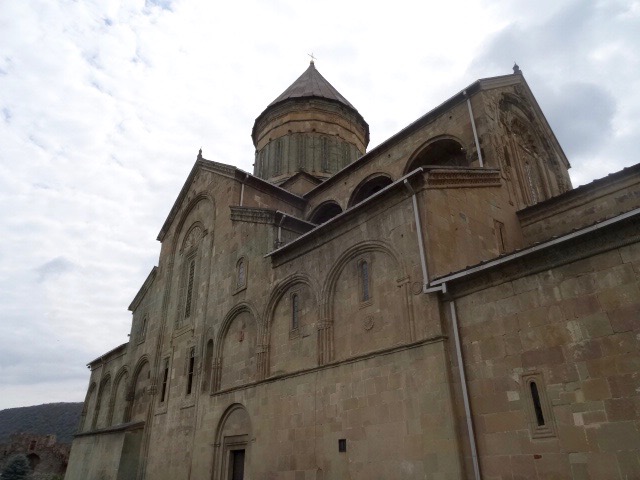 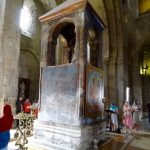 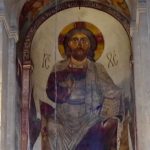 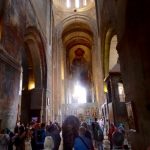 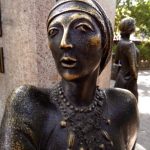 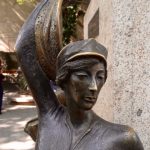 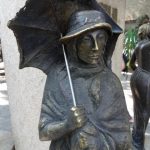 Driving back to Tbilisi, the bus dropped us off in the centre of town in a large open space by the Mtkvari River with steep hills rising either side of it. After a brief lunch we walked the streets full of elegant buildings and beautiful, meaningful statues. The most striking was the bust of Sofiko Chiaureli (1937-2008), a famous Soviet Georgian actress. On each corner were characters she had played, all in very tactile bronze.

Another very tactile bronze statue, was that of Tamada, the Toastmaster, a very important man in any Georgian party/celebration. 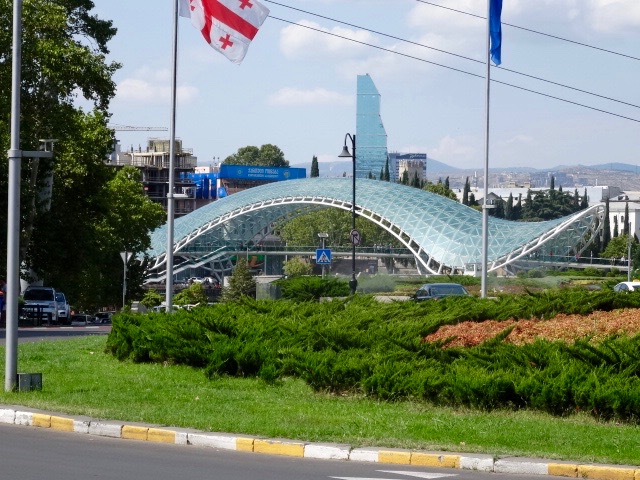 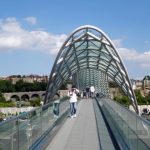 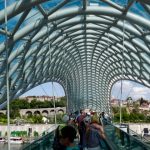 Our wandering gradually brought us round to the Peace Bridge over the Mtkvari River, an ultra-modern steel and glass structure of stunning beauty, whether looking at it from afar or crossing it. 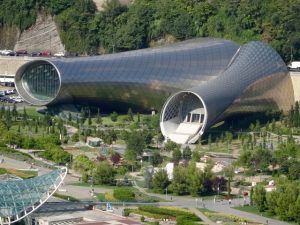 This in turn brought us to another amazing building, the concert hall and art gallery, two steel and glass tubes linked at one end but creating two separate venues. These are the work of Italian architect, Massimiliano Fuksas, who was commissioned by President, Mikhail Saakachvili. Unfortunately, when he lost power the project ground to a halt, so these buildings are not properly finished. While they look impressive from a distance, they look a little unloved close to. One day! 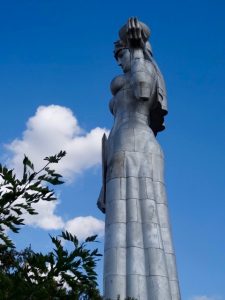 Taking the cable car, we took the easy route up to the Narikala Fortress, a largely 8th century structure with dominating views over the rest of the town. Adding to that domination, a short distance away, is a 20m statue of Mother Georgia. In one hand she holds up a sword while in the other a cup of wine, depicting the typical Georgian character of welcoming guests but vigorously fighting off enemies. Narikala Fortress has seen many such battles and has the scars to show. Unfortunately, it suffered greatly under the Russian occupation, not through battle but when, in 1827, a huge explosion of Russian munitions, stored there, destroyed much of it. 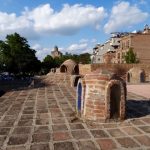 Walking down to the Old Town, we noticed some interesting dome roofs with little chimneys. They are bath houses, making use of Tbilisis’s natural sulphur springs bubbling to the surface. We contemplated taking advantage of the facilities but, after much discussion and uncertainty, decided it might be better if we visit the baths at the end of the trip, when we will feel we have deserved such luxury after our trek, and especially after a lengthy journey in the bus back to Tbilisi. (As it happens, we did not have the time when we returned, so this is a pleasure we can look forward to on our next visit to Georgia) 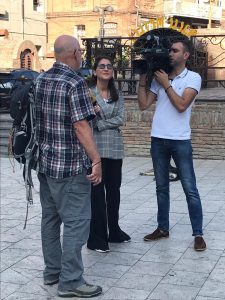 It was while we were here that I was approached by a television film crew who wanted to interview me for a programme to be broadcast later in the evening. They wanted to know what we were doing in Georgia and why we had come to their country. I explained that I had read an article on Svaneti n one of the travel supplements and decided I needed to go there. It was broadcast while we were in a typical Georgian restaurant sampling a variety of Georgian fare in the Georgian way, sharing and tasting.

Tbilisi is a beautiful city and in the 24 hours I was there I could only scratch the surface. Those that arrived earlier, had the right idea, Tbilisi definitely deserves more time and I will be back. However, I was surprised by the number of night life venues, casinos, night clubs and massage parlours (there were three Thai parlours within 50m of our hotel), not catering for Georgians, but for Turks and Iranians who are not allowed to visit such places in their own country, and probably a lot of high rolling Russians. I find it difficult to correlate a deeply religious society with aspects of life that are demeaning and potentially harmful, to society.