The super efficient hotel shuttle service whisked us along wide, fast moving highways into the city for a mere 9 Singapore dollars each. It was only when we reached Little India that the roads narrowed and became congested by parked cars, sprawling restaurants and evening strollers. 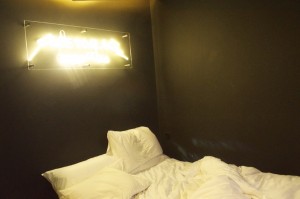 The Wanderlust Hotel is quirky. The decor in reception is a mural of comic type pictures from floor to ceiling and a variety of barber shop chairs.  Each room is colour themed. Ours turned out to be black! Everything was black, the walls, the ceiling, the tiled floor, the window blind and all the fixtures and fittings. Contrasting the black was white bedding, white towels and white cups and saucers. The bed was a raised platform at one end of the room with a white neon light above reading “Fade to Black, Metallica”. A frosted glass cubicle houses a shower and another the toilet.

Dropping our bags we went across the road for a drink and a curry. It was now 11.00pm and all the street restaurants were buzzing. Not able to sleep on a full stomach we took a stroll around the narrow streets to get our bearings. By the time we settled into our luxurious bed it was almost 2.00am.

The combination of a black room and a late night makes it difficult to wake up in the morning. We only just made it down to breakfast before they closed at 10.00am.

With the day ahead of us we needed to make the most of our time in Singapore. Reception gave me a few suggestions but it seemed we needed to get to Marine Bay and spread out from there. 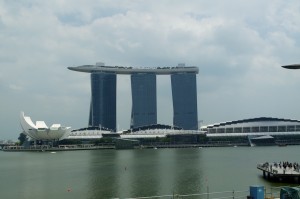 The underground is superb, spotlessly clean, efficient and not at all crowded. The platforms are spacious and pleasant areas to wait in. Clearly the benefit of a modern system compared to our Victorian inspired system, which is hard to change.

Marine Bay has a huge backdrop of modern and futuristic tower blocks around its southern and western shores. The eastern shore, where we headed for was dominated by the Marine Bay Sands shopping complex with three huge towers rising from it to be linked by a rooftop complex of restaurants. 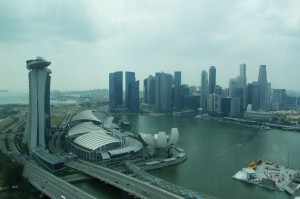 Crossing the Helix Bridge we headed for the Singapore Flyer, a wheel to match the London Eye. On the spur of the moment we decided to get an aerial view of the city. Unlike the London Eye, there were no queues and we found ourselves having a pod to ourselves. The Flyer provided fabulous views across the whole of the city and out to sea where there were dozens of ships of all shapes and sizes anchored.

While we were on the wheel we saw the open top buses parked below and decided to take advantage and see as much of the city we could from ground level as well. The Singapore Flyer took half an hour. 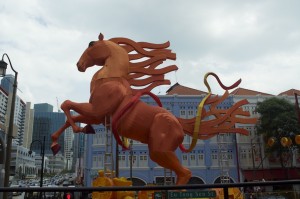 We decided to do the whole journey on the bus so that we could prioritise where we wanted to go when we finished the round trip based on what we had seen. It was good to sit and take it all in, enjoying the warmth of the sun. There was much to sustain the interest from spectacular architecture, the colour of China Town all decked out for Chinese New Year, the much smaller old buildings which are remnants of colonial days, the quantity of shopping malls and the many major schemes in progress, developing Singapore further.

Remarkably, when we alighted from the bus we were both in agreement as to where we wanted to go next. I fully expected that I would want to explore China Town further but I preferred to visit Raffles, probably the most famous landmark for British visitors. 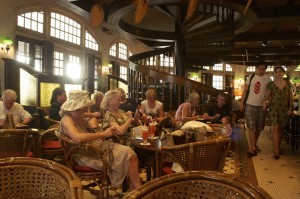 Deciding to walk, we made our way from one shopping mall to another until we reached Raffles Hotel. As well as the hotel there are many boutique type shops in the complex and the Long Bar, which we made for. You really had a feeling that you were walking into a little piece of history. Not a lot has changed since the British were in charge in this small corner of Singapore, the rest of which has clearly changed a great deal. As you walk across the floor your feet crush the shells of peanuts strewn across it. It seems that customers traditionally eat the nuts and discard the husks on the floor. Most customers, Angela included, feel obliged to drink a Singapore Sling, a strange concoction, far too complex a mixture for my basic tastes, where a beer easily satisfies. It was good to sit there, soak up the atmosphere and people watch. 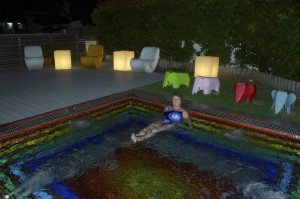 Dusk was approaching so we aimed for yet another mall on the way back to Little India for our meal before completing the journey back to the hotel. Just outside our room is a terrace with funky furniture and a jacuzzi so we decided to finish our day with a frothy soak under the night sky.

What do I think of Singapore? It is a fabulous place to visit. I am gobsmacked by the number of shopping malls there are and how so many can be sustained. I wouldn’t want to spend more than two or three days here at a time so I am quite pleased that tomorrow we head for New Zealand.