After a superb Indian summer, it was with a little disappointment that Caz and I set out  from Worcester, on Friday morning, in the rain. We were the advance party heading to Snowdonia, preparing camp for sixteen students, some of whom were visually impaired, and who were due to arrive in the evening. However, our fears of a wet weekend were unfounded, for, as we approached Snowdonia, the skies cleared and we were bathed in warm sunshine. The campsite at Llyn Gwynant is superbly placed on the lake shore, surrounded by mountains. Unusually, the ground was dry and firm. It took us about three hours to set up camp and make ready for the arrival of the group.

This gave us time to enjoy a pizza from Jones’ Pizza Co., a mobile pizza oven on site and only open at weekends this late in the season. With many weekend campers arriving, they did a roaring trade, and certainly filled an ever increasing hole in my stomach.

At 8.30 the NCW group arrived with Phil, and the King’s group arrived half an hour later with Russ. Sitting in the mess tent, drinking hot chocolate, broke the ice for the two groups who have, so far, had limited experience of each other. Eventually, the group drifted off to their tents, to sleep under a star filled sky and high hopes for good weather in the morning.

Perhaps it was too much to hope that Snowdonia would display herself in all her glory for us. We woke to cloud shrouding the summits of the hills but the forecast assured us that it would clear during the course of the day. At least it was dry.

Resting at the side of the pavement above the second lake

Fortified with bacon butties, we travelled the short distance to Pen-y-pass where I was to lead the group up the Miner’s Track while the rest of the staff shuffled vehicles down to Llanberis where we were finishing, and then catching up. The students, despite some of them having a disability, set off at a good pace, making good time over the well manufactured path. It is some years since I had walked this route and I was saddened to see such a well maintained path. While it makes the walking a lot easier, it degrades the mountain. There were a lot of people walking the route but nothing like the numbers we would encounter later in the day. 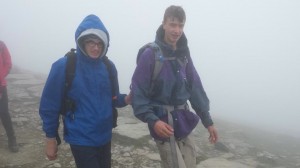 Guiding in the mists of Snowdon

Caz, Phil and Russ eventually caught up between the second and third lake and we continued as a group. Phil now took the lead while I became the back marker, particularly useful on the steep section leading up to the Pig Track, where there was greater need for care and attention. We were now entering the cloud and it was important that we maintained ourselves as a group. It was not always easy when other walkers, not realising we were a unique group, mixed in with us. The cloud, while not really producing rain, gave a moist hew on our clothing. By the time we reached the Pig Track there was a constant stream of walkers heading for the summit, while others were already on the way down. Many were representing a variety of charities as they toiled up to raise money. Some were even rattling buckets. 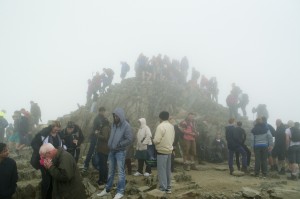 The crowded summit of Snowdon

By the time we reached the obalisk and more paths converged for the final pull to the summit, the numbers were unbelievable. We now encountered fancy dress costumes, Spider Man and the like. Others were clearly not properly equipped for mountain walking, and into the melee came triathletes running to and from the summit. While most were good natured and politely asked for clear passage there were a few who were aggressive and bullying, thinking that they had absolute right to the mountain. Visually impaired people cannot see as well as the rest of us, particularly in murky conditions, and, because of their uncertainty with their surroundings, they do not always react as quickly as others. They have as much right, perhaps more so, than triathletes. Whatever your activity on the mountain you should always be aware of the need to share the space. Perhaps, the organisers should have had a lesser used route closed to the general public so that there was not a clash of interests. 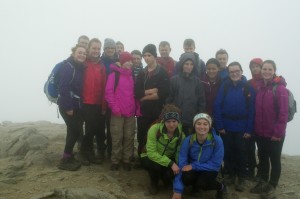 Having lunched close to the summit while avoiding the crowds queueing in the cafe, we took the straight forward descending route to Llanberis finishing at 3.30. The Snowdon traverse had taken us six hours, an hour quicker than we anticipated and gave credit to the fitness and skills of both groups of students. The NCW students stuck to the task and never once complained about the pace or the murky conditions. The King’s students readily accepted the challenge and their responsibilities to look after their partners, maintaining high spirits throughout. They all thoroughly deserved the reward of a hot drink at Pete’s Eats, a Mecca for all climbing and walking enthusiasts.

Back at camp we ate well before the students gathered round a camp fire under the starlit sky and exchanged stories, getting to know each other and to appreciate each other’s company.

Sunday morning dawned bright and sunny, although the clear skies forced the temperatures to dip quite severely during the night. At least one boy discovered that his sleeping bag was not up to the task as he shivered the night away.

Having provided them with sausage butties for breakfast, I waved goodbye to the group as they headed out for their second day of walking. I was remaining in camp to take the tents down, dry them and pack them and all the kit away, in the hope that by the time they were finished it would be simply a matter of heading back to Worcester. 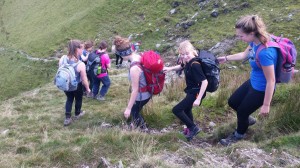 Driving over to Llanberis, they headed out to climb Moel Eilio and following a circular route over Foel Goch and around Llyn Dwythwch. Although they were not going as high as they did on Snowdon, they were still gaining about the same height and it was going to be a challenging walk, but at least without the crowds. In places the path was narrow and it gave the visually impaired, who are often fiercely independent, an understanding of the need for support, and the guides the importance of making sure that the journey was achieved in the safest manner possible.

By the time they returned to camp, it was struck and packed away, and they were buzzing with excitement for all they had achieved over the weekend.

I bet they were tired by the time they got home but I am also sure that they are looking forward to our next outing on the Long Myndd next month.