Getting there and stopping off in Sydney

The flight from the UK, although long, was fairly uneventful, and bizarrely consisted of two nights in close proximity to each other.  No sooner had we had breakfast we were landing in Bangkok in the mid afternoon.  We only spent a little over an hour in the airport and we were back in our seats preparing to eat our evening meal and it was dark already!  Having watched a film I decided, if I was going to have the energy to enjoy our brief two-day stay in Sydney, I needed to get as much rest, if not sleep, as possible.  As dawn approached we began our descent to Sydney, shrouded in low cloud.  We were almost landed when we emerged from the cloud to wet, shiny tarmac – not what I was expecting from an Australian summer.

Helen, my niece, met us at the airport and took us back to her flat in the fashionable Napier Bay area of north Sydney.  Here, we had time to chill out, freshen up and share our space with her rabbit, Raspberry, who had the run of the flat.

Taking the bus into Sydney we walked the narrow streets of The Rocks, an area of boutique shops and smart restaurants, but which once had a terrifying reputation for crimes of violence, theft and Victorian gang culture.  This brought us to Circular Quay, a hub of transport communication and one of my favourite places in Sydney for soaking up the atmosphere and people watching.  It is like an amphitheatre with a backdrop of tower blocks adding to the urban beauty of the place.  Unfortunately the quay was dominated by the presence of a huge cruise ship, Rhapsody of the Seas, filling the view on one side of the quay, completely.  It was lunch time, so we found ourselves in a quayside restaurant enjoying a beer and eating a bowl of piping hot mussels cooked in a tomato sauce.  They were the largest mussels imaginable and tasted just divine. 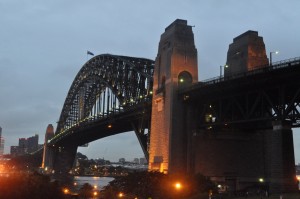 Following lunch we took the ferry back to Napier Bay, picked up our bags from the flat and Helen took us to our hotel, Glenferrie Lodge in the even more desirable suburb of Kirribilli.  Our journey was beginning to take its toll and a rest was required in our small, but comfortable, room.  If we were going to survive the evening we needed a restful afternoon.

Refreshed, Helen joined us at 7.30pm and we ventured out in the light rain to Ripples, a lively restaurant on the water’s edge, adjacent to the Olympic swimming pool, Luna Park and almost under the mighty Sydney Harbour Bridge.  Another superb meal.

Now the girlie perspective!   Warm &  damp in Sydney  so the recently straightened hair is now its natural frizz.  Oh joy!  That fades into insignificance in the realization that we are on the other side of the world enjoying one of the most vibrant and cosmopolitan cities on earth.  Looking forward to traveling to NZ tomorrow & exchanging more family hugs & kisses.