We arrived mid-afternoon in Marrakech and there was a mad dash for the showers in the hotel, wanting to get clean with hot water before it ran out.

This was the first time I could really enjoy Marrakech.  Previously, my visits always had young people in tow or my time in the city was very short so everything was rushed.  This time I had no pressures.  I had plans to shop at my leisure, enjoy the banter with the shop keepers and soak up the atmosphere.  Having showered I ventured out into the souk but, having anticipated a spending spree, felt no desire to buy and satisfied myself with a gentle amble.

With nothing bought I decided it was time to visit the Cafe Glacier for a drink and observe the goings on in Djeema el-Fna from the terrace.  Magda and Sarah Cullen, also in Marrakech, joined me and we chatted as the sun went down and people’s attention was drawn from daytime to night time activities.  The multitude of restaurants were erected, the barbecues lit with smoke drifting across the square and the atmosphere intensified.  By now the terrace was heaving with people, all wanting the same view and to watch the night unfold.  Remarkably, it got quite chilly so we relinquished our ringside seat and went our separate ways.

Later that evening we met up with Mohamed and went to Restaurant Omar for a traditional Moroccan meal.  It was much more sedate than the square but the food was good and ample.  Before we left the restaurant, the heavens opened and we knew we were going to get wet returning to the hotel.  Remarkably, the streets were still a throng of people who seemed not to mind the rain.  Like slugs, which appear when it rains, nearly every hawker on the street was selling umbrellas.  We never saw them before. 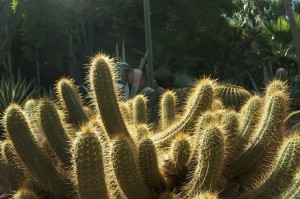 The following morning we all decided to walk to Jardin Marjorelle beyond the old city walls.  Originally belonging to the artist Marjorelle, the garden went into decline after his death.  Eventually Yves St Laurent bought it and restored it to its original glory.  Working our way through the souks in the hope of going in the right direction was fun.  Although we had a map it did not have the detail to show all the passageways through the souks.  I just followed my nose, and instinct, and was pleased that we got there without any difficulty at all. 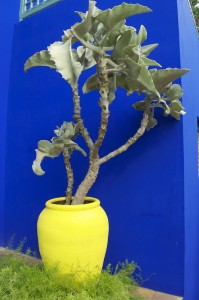 The garden, despite being in a busy city, is a garden of peace and tranquility.  There are few flowers but plenty of greenery.  To compensate for the lack of variety of colour in the garden there are pots of vivid blue, yellow, orange and red.  Marjorelle’s old studio, now a fascinating Berbar museum, is also painted the most striking blue, a stunning contrast to the greens around it and the sky above.  It was a very popular destination for tourists but it never felt crowded and all sound seemed muted.  It was also a place to people watch.  Because of its association with Yves St Laurent (there is a memorial to him in the garden) a lot of ‘beautiful’ people come to pay their respects to an icon of fashion.

Afterwards, three of us took a pony and trap, well, two ponies, in fact, back to Djeema el-Fna and a spot of lunch in another rooftop restaurant.  Following lunch we went shopping, and while it had been difficult the previous afternoon to be inspired, today it was so much easier.  I knew what I wanted and I went for it.  It was so much more pleasurable.  By accident, we stumbled across a herbalist whom I had visited in 2007 with the blind group.  I was immediately remembered.  There followed a demonstration of all of the products and then more purchasing took place. 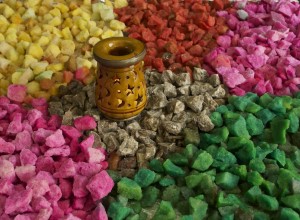 Now laden with shopping, I returned to the hotel, whereupon I met the rest of the group who all expressed a desire to meet the herbalist.  Back we went and this time I was given some free samples, bought some crystals and a crystal burner and had a neck and shoulder massage using Argon oil. By the time we had finished, that was really that.  No more spending. 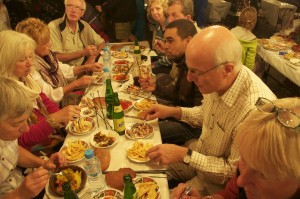 In the evening we went out to Djeema el-Fna and ate at stall 22.  I had met them earlier in the day and their banter and encouragement is infectious and hard to refuse.  They have all the catch phrases on the tip of their tongues, all watch East Enders and are all related to Jamie Oliver.  As we all turned up and began to take our seats, all the boys working on the stall clapped and cheered.  This could be heard throughout the square as customers were secured by the various stalls.  The atmosphere was electric and there was so much going on.  The food is simple, but very good, most of us having chicken brouchette  and fries, not exactly a la carte but you don’t have so much fun and banter with a la carte. 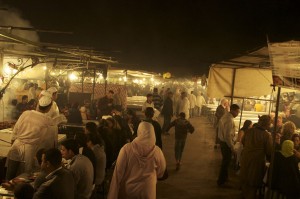 Afterwards we strolled around the square and up one of the main streets.  I was surprised to see how many beggars there were, and many of them seemed to be in genuine need, so much so that I gave away my loose change, not something I normally do.  We were approached by several men suggesting we might like wine or beer and even a belly dancer or two.  Having gone several days without, we declined and slowly filtered our way back to the hotel for one last night before our journey home.

A good trip for a variety of reasons.  Already there are plans afoot for another!