Before we set out on our journey above Chinese Base Camp, we checked again that we had everything we needed for the next few days and that we were not carrying anything unnecessary.  It was a tight fit to get everything into our 35 litre rucksacks but life was made a little easier, and lighter, when Hira suggested we let the donkeys carry our sleeping bags. 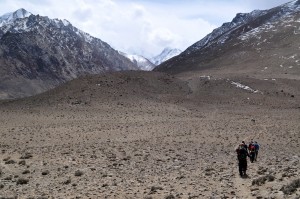 The good path up from Chinese Base Camp

Our original plan had been to trek to the Italian Base Camp, several kilometres up the glacier but, despite the fact that the distance was not excessive, it would take too long and too much out of us if we did so.  Therefore, our first day above Chinese Base Camp would take us as far as the Pakistan Base Camp at the snout of the glacier.  It was lovely to be walking on a proper mountain path as we climbed out of camp.  The path took us to a pass and a traverse around a spur into the K2 valley.  We were surrounded by stunning peaks but, as yet, the elusive K2 had not shown herself. 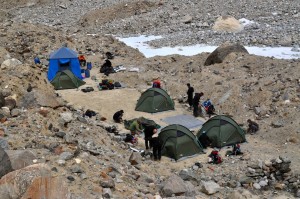 In order to reach Pakistan Base Camp we had to descend into the valley via a loose soil path down a very steep slope, a remnant of when the glacier had reached this far down the valley.  The only ice now was the frozen K2 River and we could see the snout of the glacier just beyond where our planned camp.  As we got closer to camp and the glacier the air cooled significantly.  Camp was a dry platform on the edge of the very fragile cliff down to the river.  As we arrived the crew were collecting water in a barrel, having first made a hole in the ice, to get at the water below.  The barrel was then hauled up the cliff with a rope. 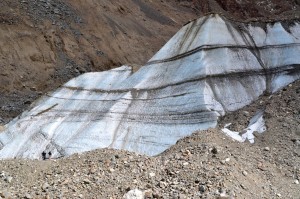 The snout of the K2 Glacier

From just above Pakistan Base Camp we should have been able to see K2 but she was still being elusive so we went to explore the snout of the glacier.  We had to be careful and be aware of the stones, some quite sizeable, hurtling fifty or so feet down the icy snout to the ground below.  To be hit by one would be curtains.

As the afternoon progressed into the evening the clouds cleared from K2, giving us some superb shots in the evening light. 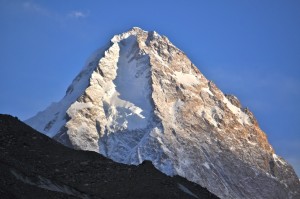 Evening sunlight on the upper slopes of K2

Dinner was served in our tents as we were now minus a mess tent.  To be honest our tents were the best place to be as the temperature plummeted.  Despite the cold it was well worth vacating our tents for a second spell of photography as the last rays of the setting sun faded from K2s upper slopes.

The night proved not to be quite as cold as expected for cloud rolled in and dumped a couple of inches of snow on us.  It was still snowing, although only lightly, when we emerged from our tents for breakfast. The sun soon forced its way through the cloud and we were able to proceed to Italian Base Camp, several kilometres up the glacier and a few hundred metres higher at around 4800m. 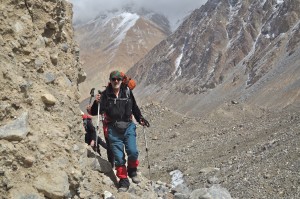 David negotiates the tricky path between PBC and IBC

Our journey took us through an area of extremely fragile landscape, which brought imminent danger from rock fall, landslide and possible avalanche.  If yesterday’s path had been pleasant, today’s was anything but.  We were constantly having to watch where we put our feet on the rocky, stony surface where there was hardly a discernible path.  All we could do was link a series of small cairns (only two or three stones in height) to be sure we were on the right track.  After seven ankle twisting, foot bruising hours we reached Italian Base Camp.  It is situated at the side of the glacier in a very barren, rocky landscape.  A few relatively stone free platforms have been created for tents, which had to be held down with rocks rather than tent pegs.  Despite its barrenness it was a most amazing place. 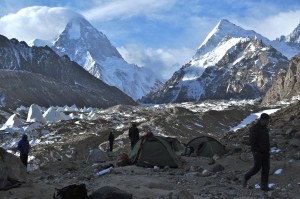 Looking up valley from Italian Base Camp

Now that we were in camp, and not having to concentrate on each footstep, we could take in the scenery around us.  Further up the valley, head and shoulders above anything was the beautiful and spell binding K2.  On either side it was flanked by lesser, but none the less beautiful, peaks.  Descending from the foot of K2 snaked the glacier, in the main covered with rocky debris out of which, soared pure white pinnacles of ice.  Other glaciers tumbled from smaller side valleys to interfere with the downward flow of the main glacier.  This place is special.

During the night we expected to hear lots of complaining cracks and groans from the glacier, but there were none.  I can only assume that the glaciers on the north side are less active than those on the south. 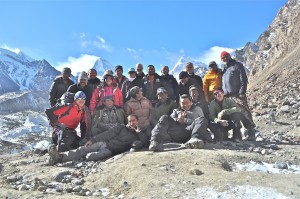 The team at Italian Base Camp with K2 showing top left

The following morning we could choose what we wanted to do.  We were not going to camp any nearer to K2.  The terrain was much too difficult for the donkeys and camel men to carry the kit and suitable camping places were minimal.  Also, the further up the glacier we went the more technical the journey would become. Going from Italian Base Camp we could explore further up the glacier. 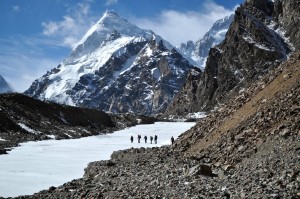 Heading off to explore the glacier and upper valley

One group went with one of the camel drivers as a guide to get a closer look at the awesome pinnacles on the glacier. Others, including me, preferred just to potter about on the glacier and enjoy its features and those of the surrounding peaks.  We ambled up to a point where a hanging glacier tumbled into the main glacier.  Here there was more activity with occasional ice falls entertaining us.  We sat in very pleasant sunshine for some considerable time chatting while, all the time, taking in the scenery.  Gradually people drifted apart while Ann and I continued to absorb our surroundings.  Eventually I guided Ann back to camp avoiding the many crevasses.  Dropping off the glacier we walked down the frozen river running by the side before climbing back to our rocky camp. 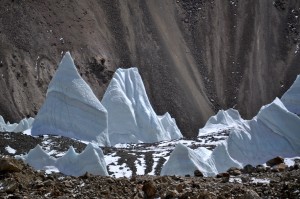 The majestic ice pinnacles of the K2 Glacie

The sun began to lose its power as some cloud drifted in and the temperature dropped.  Soon after lunch I stuck my cold feet into my sleeping bag and contemplated what to do.  I had not brought my diary, my kindle nor my MP3 player with me in order to reduce weight.  I could have done with something.  Gradually others returned with their tales of excitement on the glacier and they were all tired from their effort on such terrain at such altitude.  Glacier walking is not an easy exercise.

I didn’t really get out of my sleeping bag for the rest of the day; it was far too cold to stand around for long.

The following morning was particularly cold, with an in tent temperature of -15C recorded.  The outside temperature would be a few degrees lower.  Our breath had condensed on the walls of the tents and turned to frost. 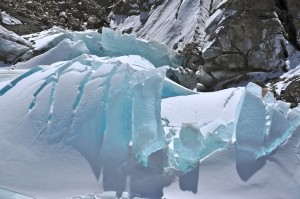 We were given the freedom to head down as soon as we were ready, rather than wait for our guides.  I needed to get my feet warm, so I set off as soon as I was ready.  I felt energised to be going down and set a good pace to utilise my new found energy and to warm my feet.  Occasionally route finding proved interesting when it was difficult to pick out the small cairns in a sea of stones.  In order to help those coming behind I enlarged some cairns and created others so that the trail became more obvious. 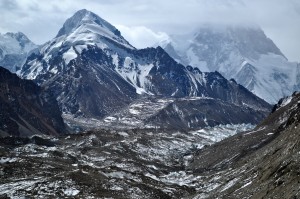 As we left K2 the clouds began to envelope her.

As we descended whips of cloud, like fingers, encircled K2.  She had revealed herself to us throughout our time at the high camps.  Now that we were leaving she was covering herself up again as a sign of farewell.

The journey down to Pakistan Base Camp took four hours and although faster than our ascent it required maximum concentration.  Robin, coming down some way behind, lost his footing and took a tumble, hitting his head on a rock, cutting his arm and shin, hurting his wrist and little finger and denting his pride.  Remarkably, the bump on the head was the least of his injuries.  Patched up by nurse, David, he was able to continue.

From Pakistan Base Camp we had to climb up the steep, precarious path out of the valley and from there on it was a delightful romp back to Chinese Base Camp.  The weather seemed to be deteriorating so those of us who made it to camp first put up all the tents.  Remarkably, as soon as they were up, the skies cleared and nothing untoward happened. 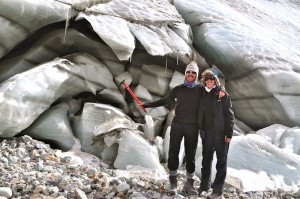 In the evening, after dinner, there was an announcement made.  All the crew joined us for it.  While on the glacier Mo asked Katrina to marry him.  She said ‘yes’, of course.  It was such a surprise and the first engagement to occur on a Himalayan Club trip.  Good luck to them.  Perhaps they should get married on the Mustang trip next year.