Slept really well in a massive bed belonging to our absent hosts Shane and Kay.  Head much improved.

Today, February 6th, is a bank holiday – Waitangi, celebrating the occasion of the signing of the treaty between the English and the Maoris.  There is usually some form of demonstration on this bank holiday because, the treaty, when translated had a different, less favourable, version for the Maoris than for the English.  Resentment is still harboured by some for the way in which the Maoris were duped into signing the treaty.

Ben and Kelly picked us up at 10.00 and took us to the café at the Botanical Gardens where we met Jim, Kelly’s father, for the first time.  Jim is a lean six-footer who, despite having lived in New Zealand since 1960, has not lost his Irish accent, or the Irish twinkle in his eye.  Chatting over coffee, with sparrows begging for crumbs, it soon became clear that he is the sort of bloke you relish at dinner parties for the tales he can tell.  It was wonderful, just listening to him recount events during his past with a richness of language and character.

After an hour or so we separated.  Ben and Kelly took us to the viewpoint at the top of Mt. Victoria, which overlooks the city and the extensive waters of the safe harbour.  Unbelievably, there was hardly a breath of wind, but there was a Wellington version of the Beaufort Scale on a sign board involving a woman holding an umbrella, or not, depending on the force of the wind.

We then drove around the coastline to the area where Kelly was brought up on small beaches and rocky outcrops, with neat wooden houses hugging the coastline with a steep verdant backdrop behind. 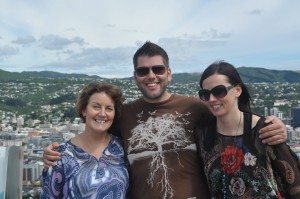 I was, perhaps, a little rash in my comments yesterday regarding natural garden landscaping in preference to neatly manicured gardens.  We saw quite a few extremely well presented gardens on our travels today.  However, it goes without saying that if the terrain does not make garden landscaping a sensible option, the natural approach is preferred.

Following our morning explorations we drove a little way out of town to Kelly’s aunt Kay and Uncle Jim’s house at Tawa.  Cousin Fiona also lives there.  Ben was providing the ingredients for a Kiwi barbeque, steak, chicken skewers and sausages along with salads.  Jim, Kelly’s father was also there for the feast.

Introductions over, we sat and chatted in the lounge.  Uncle Jim has lived in New Zealand for fifty years, yet has still retained his strong Peebles accent.  The conversation flowed well and we were made to feel most welcome.  Ben and Kelly went to prepare the food and we joined them in them a few minutes later when the smells started to drift up to the lounge.

As the lunch progressed the conversation centred on aunt Kay and she came out with story after story while the rest of the family got quieter and quieter. It wasn’t a case of drink loosening the tongue, as neither Kay nor Jim drink.  Uncle Jim is a very fit looking seventy-two year old who keeps fit by going for a two hour walk each morning, usually with a stop for coffee along the way.  He does not walk into the surrounding hills but just along the streets of the village.  I was amused, later, to discover that he used to be a postman.  Old habits die hard.

By four o’clock the party began to wind down so we said our goodbyes and went out to a lookout at the top of the ridge just to the north of the town.  The woodland was varied and some of the trees were huge.  Some trees were in full flower and there, usually, could be heard were Tuis, a large(ish) black bird with a white, second voice box on its neck.  It makes a variety of unusual sounds and lives off the nectar of the flowers. 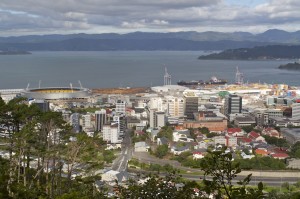 Angela and I decided to walk down the North Walk Way, through the trees, back to the flat.  Below the ridgeline the trees had been cleared, leaving a lush hillside of bushes.  The benefit to us, walking down, is that we had clear views over the city and the harbour all the way back to the flat.

After so many years of hearing Ben and Kelly talk about Kelly’s family, we had actually begun to meet them today.

A busy and sociable day enjoyed by all.  There was lots of sunshine and laughter.  Ben manned the barbecue, which gives an indication of how readily the Maguire/Kilner family have welcomed and accepted him.

Wherever we went we were treated to magnificent views of the bay and surrounding hills.  The birdsong and abundant flowers convince us that it is Summer and we are on the other side of the world.