By the time we woke up this morning the rain had almost stopped and the cloud, looking much less threatening, promised to clear to give us a much better day.  The plan was to catch up on those things the weather prevented us from doing yesterday and to complete our coastal exploration of the Catlin coast. 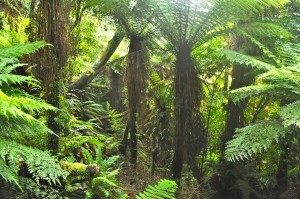 Our first port of call was the Cathedral Cave, close to where were staying.  This is a very tide dependent visit as there are only four hours a day when the caves are accessible.  Today, low tide was at 11.00 so the caves were accessible from 9.00am to 1.00pm.  From the car park there is a twenty-minute walk down to the beach, through tropical forest with lots of tree ferns; it was very beautiful. This led on to a pristine, sandy beach, the only blemish being the orange kelp seaweed, which, because of its similarity to giant squid, gives me the creeps. 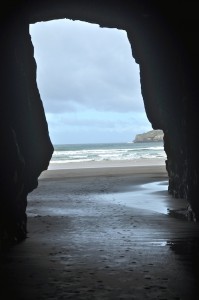 The cave is quite impressive, with two entrances coming together in a right angle.  The cave narrows significantly the further you go in and it is not until you are almost at the end that you realise it is a complete walk through.  At the very end, on the junction, there is a pile of rocks, which seemed to be relatively dry, suggesting they were above the high tide mark.  I would not want to be the one to put it to the test.  Eventually the sea will erode the cave sufficiently for the roof to collapse, producing and arch and a stack, but that is many thousands of years down the evolutionary line.

Our next visit, the McLeans Waterfalls were a must after all the rain we experienced yesterday.  Without a doubt they were going to be impressive and they did not disappoint.  Again, they were approached through some more tropical forest.  Many of the trees had red peeling barks, which stood out in the damp conditions. 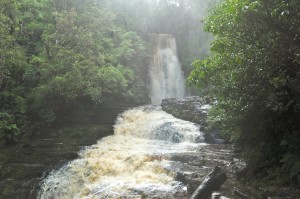 Increasing water noise indicated that we were getting close and we initially came across a thunderous cascade before we finally came across the main waterfall, a column of water falling 22 metres over a rock lip into a plunge pool and then cascading down an equally impressive rock slide.  The volume of water was immense and it far exceeded the images on post cards we had seen so far.  The air was full of spray and we were soon quite damp. 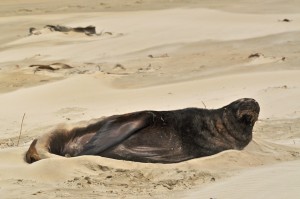 One of the more active shots of a sea lion!

Returning to the car, we headed up the coast to Surat Bay, named after a ship wrecked in the bay in 1874 and known to be a place where sea lions come ashore.  Surat Bay is where the Catlins River enters the sea.  Our walk took us the last few hundred metres along the estuary before turning into the bay and feeling the full force of the wind.  As we walked a lone man returning from his walk approached us. I asked him if there were any sea lions languishing on the beach.  ‘Only that dead looking thing you have just walked past and another ahead.’  To think, I had just walked past a big, bull sea lion and mistaken it for a lump of beach detritus.   They just lie there, occasionally flicking sand on to their backs to prevent themselves from overheating in the sun.  As sleek and beautiful as they are in the sea, they are fairly ugly out of it.  Sadly, also, they are fairly inactive, preferring just to sleep and neither specimen on the beach today was in any mood to entertain us. 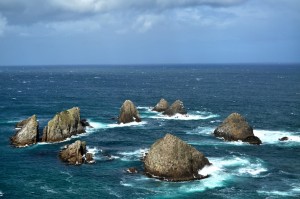 The nuggets off Nugget Point

Our next visiting place was Roaring Bay and Nugget Point, almost adjacent.  Roaring Bay has a penguin colony and a hide from which to watch them.  Unfortunately we were there too early as the adults do not begin to return to their nests from fishing trips until late in the afternoon.  The hide was also quite some distance from the beach so, even with a large telephoto lens, the pictures would lack the detail I want.  The walk up to Nugget Point is about a kilometre just below the cliff top on the leeward side sheltered from the strengthening wind.  A long way below, quite some distance from the sea, among shrubs, were four sea lions, two mothers and two pups.  Reaching the lighthouse at the end of the headland, the wind hit with full force.  Nugget Point is aptly named for the nuggets of rock sticking up out of the sea beyond the point.  The contrast of the brown rock, white surf and blue sea in the sunshine was stunning. 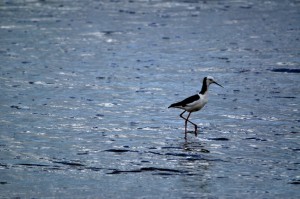 By now we had seen everything on our list but as we drove along the beach towards Balclutha we came across interesting birds and another lone sea lion who was a little more active, although while he was perched up on his front flippers when we first saw him, he refused to do so for the camera.

We made good time and reached Dunedin by 6.00pm.  Now the fun started, looking for somewhere to stay.  In trying to get to the coastal area of St. Kilda St Claire where there was an esplanade, we found ourselves on the stunning Otago Peninsula.  Eventually we found where we wanted to go but despite our expectations of plenty of seaside style accommodation, there was virtually none, and what there was was full.  Finally, after an hour and a half of searching we stumbled across a motel, which had one room left.  Phew.

What a wonderful wander we had today.  We whizzed down and up a steep forest path to the beach caves, then whizzed up and down a steep forest path to magnificent waterfalls.  Finally we explored windswept beaches and succeeded in our quest for sea lions. Needless to say I was ready to relax in the car for our journey to Dunedin. The evening was spent at the local pub eating salmon with rugby on TV in the background, there were Scottie dogs woven on the carpet!  Scotland is never far away in Dunedin!