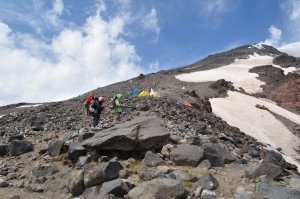 Our introduction to Turkey was the vibrant and exciting Istanbul followed by the more demure Ankara before we began our exploration of the rest of Turkey.

First we discovered the uniqueness of Cappadocia, the Ihlara Gorge and the   amazing limestone sculptures around the town of Goreme. Wild flowers grow everywhere; isolated gardens that abound with fruits and vegetables. We followed old paths to visit rock-cut churches, monasteries and cave dwellings, all of which are set against a textured moonscape of bizarre volcanic erosions. Then we travelled to the mighty Taurus range passing glistening mountain lakes. This was a challenging and adventurous 7-day trek through the Taurus Mountains towards the rich and fertile plains of Southern Turkey. An intricate topography of lofty gorges and compact valleys made this part of the Taurus (known as Aladağlar) a very attractive challenge. Nomadic groups inhabit the high meadows or pastures during the summer months of June to September – in particular, the yörük, who are Turkoman in origin and whose traditional occupation is grazing their goats and sheep. On trek, we often met with the hospitality of the nomads and local villagers of this area.  In the village of Demirkazik we visited the school, met with the children and were able to give sufficient funds to allow for the renovation of the toilets and to build a protective fence around the school.

Ararat, or Mount Agri, is the highest mountain (5,137 meters – 16,853 feet) in Turkey where tradition says Noah’s Ark landed after the Great Flood. The mountain, permanently glacier-capped, is in fact a dormant volcano which last erupted in 1840.  We concluded our Turkey experience by climbing Ararat.  It was a challenging climb, partly due to poor weather conditions on summit day but we have been reliably told that we were the largest and youngest group ever to climb Ararat.

To discuss this or any other trip please GET IN TOUCH